The difference between a banker and a manager . . .

I was preparing for a big day in front of the TV watching the Paris-Roubaix bike race by reading team's twitter feeds when I spied a post on Zero Hedge about J P Morgan getting out of the student loans business.

As many people will remember, it was Jamie Dimon the CEO of JPM who made a decision sometime before 2007 that his bank would no longer be in the exotic mortage derivatives business. That's an awkward way of saying that he sold what he could of his repackaged subprime mortages and waited for the product to blow up. Now I always wondered how you do that? I mean within a bank you've created a huge specialist unit who have essentially swapped a good pay package for a f##king great pay package . . . those people tend to be zealots in their view of the product and therefore fight back against any move to marginalise them as Mr. Dimon had done in 2006 - 08. Personally I've never respected JPM because of the things ex-JPM's have told me about the poor risk systems they had in place to deal with the products in question. "They weren't really a player in those because they couldn't manage them, not because of they didn't want to be in them . . . " was a typical comment I heard during 2008 - 09 around the bars of Singapore. Here's the genius of Jamie Dimon. Clearly if all those PhD's and specialists couldn't show him how to manage/commoditize the business safely then why even bother trying to be in the space? If you make that decision you need to cut out the cancer from the company. Essentially you have to learn to live without an organ that you thought was integral to your future/return on equity etc.

So back to student loans. We've seen the figures about students falling behind on loans. In September the Department of Education reported that in 2009 the default rate, which is defined as non-payment for 270 days, had reached 8.8%. 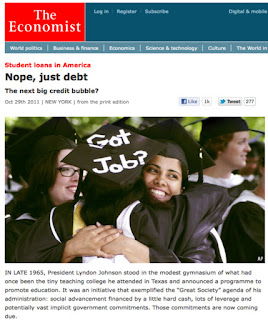 The 2009 tranche is the latest "cohort" available and we won't get the data for the 2010 tranche until September this year. The Economist reported back at the time these 2009 stats became available that "By some estimates delinquency rates, an earlier indicator of stress, for student loans exceed 10%, ten times that for credit cards and car loans." So, JPM decides to get out of the product. Dimon does it right . . . he sacks all the sales specialist of the product so there's no one left to tell the generalists every morning how great the product is and more importantly there's no one left to remind clients, important clients, that JPM was the one who sold them the repackaged crap. All the clients know is that the only people pushing this stuff is some other huge investment bank. It's beautiful. If you think this isn't important than maybe you don't know that there is a trillion dollars of these loans out there .... anyone remember subprime?

OK, enough of the doom and gloom onward to Paris-Roubaix. Hey anyone notice how nearly all the teams have developed bikes specifically for these northern races? Just coincidentally these bikes tend to be a more comfortable upright ride than traditional grand tours racers. Makes you think, why now? It couldn't be the fact that your average MAMIL might prefer to buy one of these rather than a mid-level racer he knows isn't ridden by the pro's? Just thinking out loud..... 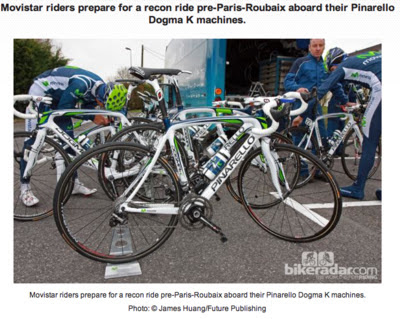 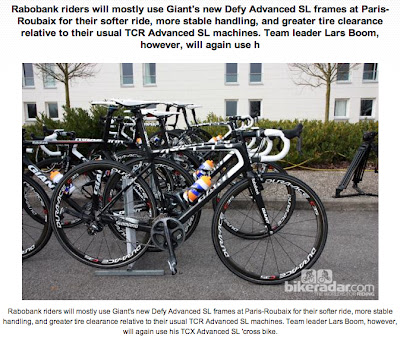