The press usually gets it wrong and then has to sprint to catch up. Most of the teeth gnashing over the weekend had to do with poor US jobs data. But that's not the reason the stock market took a dive, rather it is of course the Chinese CPI number. Today's CPI number confirms once again that central banks have little room to move. It may be OK for Bernanke to let things go as he's trying to re-inflate a housing market that is still on the slide. The Chinese on the other hand are at the begining of defalting their own property bubble. They need to balance the needs of a small affluent middle class in the main cities against a vast mass of peasants who are not so concerned about Beijing condo prices. They just know if meat and fuel goes up they get poorer.

So, what are we left with? Probably the market is now betting against any Chinese stimulus to help stock prices. The very fact a teenager in China sold a kideny for an iPad and Phone has got to ring alarm bells with the central government .... and with Apple for that matter. The Aussies are not going to like the result in my view. Stay short the AUD. 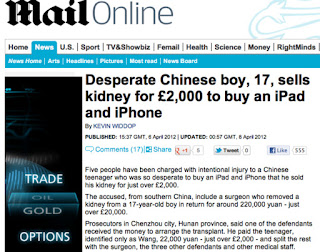 Meanwhile Big Ben must be itching to do QE3 because he knows that without it the next shock (such as the student loan bubble bursting) might kill off his economy for 10 years.


Back to the bike. 50k short ride before lunch with the Baron. Couple PB's on the time front as well. Clearly my Italian experience has helped. The goal this week is 220k's. 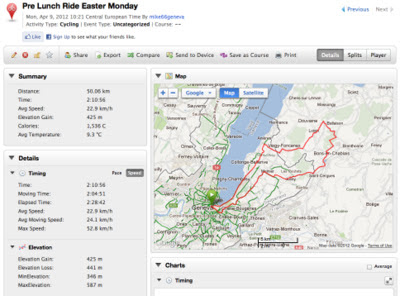 I forgot to mention I spent some time working on Mrs IBC's bike. SRAM lovers are a mystery to me. I just don't get the benefit of double tap technology on the shifters. It feels too easy to make a mistake ... I mean the last thing you want is to shift down when you want to shift up for a hill climb. I think I fixed her problem. It seems that the cable to the rear derailleur was actually too tight causing her difficulty in shifting down . . . . I loosened it up and all looks good.