Heat . . . it's been a while, but summer has hit Australia with a vengeance. I pulled out the special Cannondale-Liquigas summer-pro jersey that I thought I would never wear and headed to Sydney's beaches for a ride. 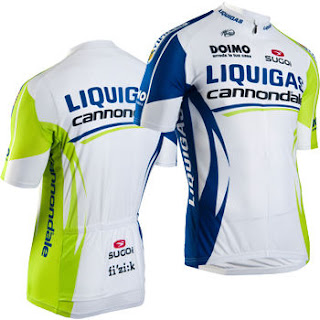 I'm not going to say I look good in it, in fact far from it. These pro jerseys are tad tight and translucent for the taste of all but my closest family. If you're really fit then you're not too worried, but if you're not you tend to hope you don't run into anyone you know who doesn't ride a bike.

It was 33 degrees celsius when I got on the bike, but thankfully a cooling breeze hit me as I hit the flat of Rose Bay and the harbour before climbing up heartbreak hill towards the seaward coast. 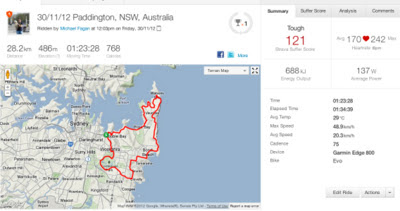 Late morning traffic in Sydney is usually pretty good as most of the tradesmen and builders have settled into their jobs for the day and the mums in 4wd's have finished the school runs and have taken seats at the usual cafes. The Cannondale was humming after it's regular maintenance and the big ring had me driving along at a nice cadence.

The news continues on the positive side in the US. The fiscal cliff though remains for all to see. I was watching the West Wing on cable the other day and started to think what might happen if Obama adopted the same tactics as fictional liberal President Josiah Bartlet (Martin Sheen). I think it's a fair enough question. The Republicans although still well represented in the Congress are in a political no mans land. Obama has a chance to further rattle them by pushing them to the brink . . . you know in fact there's an argument that says he should just push the whole thing off the cliff and call their bluff. Personally I don't think he'll do it, but it's more possible than some commentators might care to believe. The Republicans are calling the current proposals “completely unbalanced and unreasonable” . . . too bad.

I was reading the Lex column in the FT today regarding the Aussie banks. It was the usual hedge fund inspired piece about Australia teetering on the edge and that the banks were over dependent on non-AUD funding etc. Look I know this and continually seeding it in the press won't make short bets pay off any time soon. An RoE of 15% v. international peers returning way less than 10% means that a 1.7x PBR is probably not unreasonable, especially when you also pay good dividends in an expensive currency. I'm not going to fall for being a massive bear on these in an environment where the BoE has just come out and said it's worried about proper book valuations in the British banking sector. That to me says that until we get the new Governor in place and see some real revisions of the rules we really don't know what the PBR is for many of the systemically most important banks in the world. Perhaps better to short some of these and watch them try and raise new equity capital to justify coming write-downs. If the BoE gets it's way and the banks have to raise GBP 20 - 50bn then stay long the hybrids and short  the equity. The credit situation will improve, but shareholder dilution is assured.

The press are talking more and more about the China A v. H share trade. The FT today has a really good graphic showing what's happening: 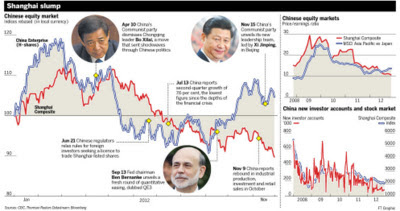 Non-Asia based investors might not understand that the Chinese government is keen to stimulate buying of local shares to the point where Beijing relaxed rules for foreign investors wishing to apply for a licence to trade shares on the mainland, while officials from the Shanghai and Shenzhen exchanges travelled to Japan, Europe and the US in September in a bid to attract new investment. The bankers in HK tell me that QFII capacity remains tight (that's the gateway for capital between the world and China) and I wonder if an increase in the facility might be just around the corner? If that happens I think it would cause the switch from H to A . . . especially if brokers were a little more reasonable with the fees they charged.

The heat's getting to me so I'm off for a swim in my pool. I may not have the mountains of Switzerland anymore but I do have my own pool and it looks very inviting right now. So as a treat thanks to a friend in NYC I leave you with the following "Pythonesque" accessory that riders everywhere would do well to consider: