Time for some manual labor. I spent the day ripping out an old kitchen at my brother in laws house so won't get a chance to ride today. A perfect spring day here so I'm catching up on some reading.

The Greece situation seems to matter less everyday as I believe the market is starting to ignore European contagion and instead take the glass half full view of the world and concentrate on improving US and Chinese numbers. Now I'm prepared to believe the US numbers and I'll predict that the Mega-storm effect will provide a positive surge in US GDP in the coming two quarters.  US weekly initial jobless claims fell more than forecast. Maybe more importantly the ADP said companies added 158,000 positions in the private sector during October. If you're US believer as I tend to be, then this is what you want to see. Of course if you're long US bonds it might not be such welcome news.

I don't believe in China even though the official manufacturing PMI came in at 50.2 in October (49.8 in September ). I believe that the 1.7% rally in Shanghai had more to do with Asia's favorite gambling game real estate. Reports are that more cities will relax real estate restrictions, thus once again sucking in cash to the developers and speculators. I am positive that the Chinese government will not want this unless they see construction jobs slipping too fast driving workers on to the street. Be very careful.

In some ways I thought it was very sad that Sharp admitted there is “material doubt” about its ability to stay in business as it warned of a second year of record losses. Many years ago I spent time at Sharps HQ looking at both their TV and solar panel business. The technology in both units was amazing for the time, but it was technology where the barriers to entry were not high enough to prevent the Koreans in TV's and the Chinese in solar panels from playing havoc with Sharp's plans. We also know that Sony is in a similar position as it's technology and business models have been surpassed or improved on leaving the once cutting edge innovator slashing margins to keep revenue stable. Unfortunately all this relies on a constantly renewable line of products that are desirable and scalable. On top of that given the ever rising JPY an a bad record of off-shoring production has left techno Japan without anywhere to go but down. Look at Panasonic, it was down nearly 20% yesterday and I don't know what they do? I mean you can't produce losses of near USD10bn after saying you were going to breakeven without questioning whether you have any chance of saving the business.

I'm going to be riding on the north side of Sydney next week and I'm looking forward to  seeing the difference. It's taken me a while to get comfortable with eastern Sydney and I hope the traffic is a little less aggressive in the leafy north. Tuesday I think we'll get to the northern beaches, while Thursday I'll be hill climbing in the lower north shore around the harbor.


Long time readers of this blog know that I've mentioned how much I liked the aggressive look of the German made bikes out of Canyon. The technology they've employed in the video is a typical approach to the German school of quality assurance. I'd like to have a test ride on one . . . especially this special edition version see under the Giro leader this year: 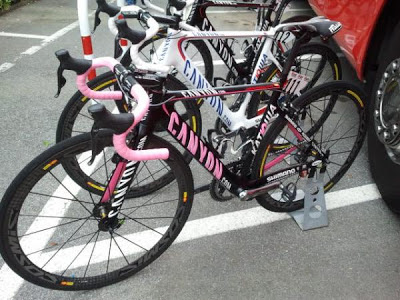