I received a mail from my favorite Italian bike shop "Cicli Mattio" this morning with a bit of a surprise. It looks like Cannondale have released two SuperSix Evo special edition frames: 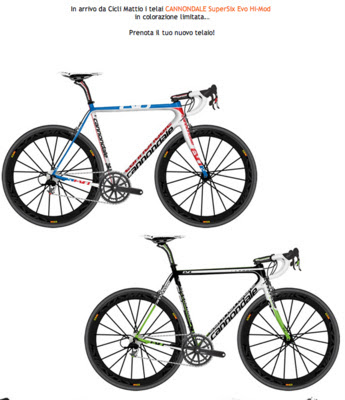 For €2999.00 you can have either the USA themed frame first used to celebrate Liquigas rider Tim Duggan's national championship or alternatively the black, white and green model that looks suspiciously to me like the new Cannondale team bike now that they've split from Liquigas. Either way I think they're pretty nice bikes and well worth talking to your local Cannondale dealer about . . . or maybe just call Maurizio or Giovanni in Piasco and tell them you'll be over in May for the Giro when you'll pick one of them up. Perhaps the blue bar tape and red hoods might be taking it a little too far, but why not. 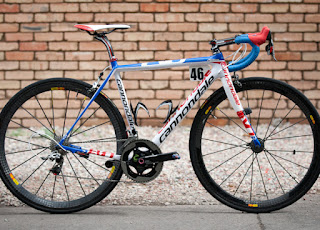 Sydney was all about wind today and a little rain. I got out while the going was good and enjoyed my usual 33k ride with only a few minor hiccups. Comming out of Bondi a guy decided it was OK to just pull his car out of its parking space without looking. I managed to get past, but the guy on the black and silver Colnago C59 just behind me let him know that he needed to watch out in future. 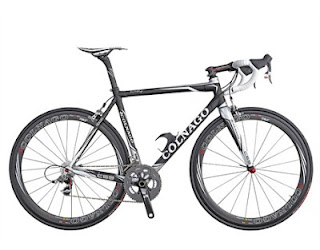 The Colnago looked brand new to me and was about the third one I'd seen that morning. My guess is the order for all these guys arrived in the same shipment from Italy and no doubt there was one very proud bike shop owner counting his cash as these left the shop. I didn't see many other high end bikes, a couple of Focus's in black, but no Pinarello's or Williers.

While cruising on Youtube I found this video of a Ferrari 458 Italia vs. Colnago C59 Italia:

" . . . after AUTO 100 founder Sue Callaway returned from Art Basel Miami, where she had attended the celebration of Luca di Montezemolo's twentieth anniversary as Ferrari's Chairman, the idea to place these two purebreds against one another came to life.

Sue's strong, well-established relationships with leaders of the automotive industry—especially Ferrari—made obtaining the car a rather straight-forward task. However, procuring the Colnago took a little more work. "I remember calling up Colnago, and they were a little reticent about giving us a bike. When I mentioned we were also getting a Ferrari, they became more interested." However, that was before Sean mentioned the real plan. "I proceeded to tell Billy Kanzler at Colnago North America that I wanted to barrel down a 7-mile canyon in Malibu on one of their bikes to see if I could beat a Ferrari. Somehow I'd convinced myself it might be possible because of all the switchbacks."

It sounds like a nice way to spend a day near LA. I used to be a car person, but kind of fell out of love with exotic vehicles in Asia where cheap finance meant every man and his dog in Singapore seemed to drive a supercar. I don't know why, but to me a C59 seems more exclusive than a Ferrari 458 right at this moment. What do you think: 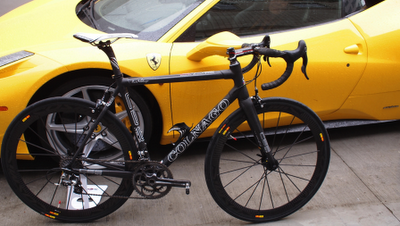 Maybe if I could get the appropriate roof racks for the 458 I'd reconsider my love of cars. Love is expensive.

Equities on the other hand are getting cheaper and although I expect a minor relief rally next week it seems to me that reality of the Obama re-election is coming home to Wall Street. Most chilling was this piece from CNBC straw man Rick Santelli on the possibility of a wealth, rather than income tax. I don't know where this came from, but if it's being leaked to him from Congress it's pretty scary stuff.


OK, it's a bit of rant, but it shows where peoples heads are going when we're facing the fiscal cliff. Obama's staff are leaking stuff ahead of his meetings next week with Congressional leaders. The POTUS wants higher taxes on the rich as a condition of any budget agreement with Republicans according to the FT.

It's going to be a busy week, so hold on to your portfolio's as this could get rough.