I haven't produced a blog for a few days as I've been waiting to get a feel of what US retail has been like over the mega-sales of "Black Friday and Cyber Monday". I wasn't surprised that Amazon came to the market during this period with it's first bond offering in about a decade. The company sold $750m of three-year notes at 0.65 per cent, $1bn of five-year debt at 1.2 per cent and $1.25bn of 10-year securities at 2.5 per cent. That's a cool $3bn worth  of debt. The world's largest online retailer still only manages to get a Baa1 rating (Moody's) for it's offerings due to it's low margins and therefore in my view "perilous" business model. Last quarter Amazon actually lost money and even with that trades at close to a 5 yr high! I know it's all about revenue, but compared to say Apple it all seems like a house of cards. 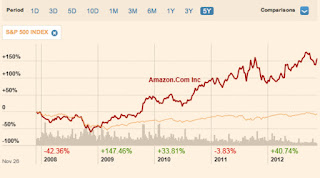 The retail sales season seems to have opened with a collective sigh of relief. The figures we have so far are positive in my view, but if I remember correctly this happened last year and things fell away sharply after that. I've said before that I won't bet against "America the nation", . . . though I'm tempted in the case of "America the markets".

The Europeans meanwhile are patting themselves on the back as for about 10th time (sic) they've reached another accord to make sure the Greek patient is kept on life support. This time the Greeks get about E44bn in exchange for saying that the can they kicked down the road has to target a deficit of 124% of GDP by 2020. It's just not sustainable and I suggest that either the Europeans accept a proper haircut or Greece leaves the Euro. I bet the retail sales numbers out of Amazon Greece are unlikely to impress any time soon. Good luck.

Italy is seen as a shoppers paradise for a lot of good reasons. If like me you spent a couple of years trying to figure out Swiss retail prices on goods then Italy also looked like a bargain. According to the WSJ Italian consumer confidence has dived to new lows. The collective angst in Italy regarding the position of middle class saviour Mario Monti leaves the future looking like a giant black hole. Italy of course has lacked stability (well at least since Mussolini), but always found a way to muddle through. The number of engineering and associated industries in the north is amazing. Take a drive along the Po River valley and the number of household names you'll see is enough to make an worried Italian bond holder sigh with relief. The problem is that much of this industry is locked up in the non-listed world of the Italian family business culture who have quite rightly played their cards close to their chest for fear of opening themselves up to various punitive taxes. The German "mittelstadt" is similar, though somewhat less threatened. Wars and governments come and go, therefore you tend to hold on to things you know will be around in the future. Europe is a world of bond investors and the anglo saxon world prefers equities generally.

The Swiss island fortress remains under siege and latest news is that regulator "Finma" may ask UBS to allocate more of its existing capital to cover operational risk. This is in direct response to the recently concluded rogue trader case. My friends in Switzerland remain acutely aware that as a nation they no longer have the stomach for the big bets that investment banking requires. A quieter existence based on money management seems more to their liking. We used to say that Zurich was the city that looked restlessly for new worlds, while Geneva seemed content to take it's 2% and let someone else worry . . . but the GFC hit Zurich and Madoff hit Geneva.

My own shopping efforts have been rather modest and about 40% of the US average ($463) spend during this period. I bought a nice set of back-up Look Classic pedals in red in case I need to reconfigure any of the bikes. 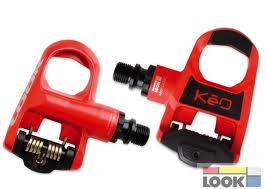 I got them for AUD64 v. the local price of AUD104 so added some other smaller things to the package and paid the 20 bucks rapid delivery charge.

Over the weekend I managed to get out into the Aussie country side and rode the course from Mt Irvine to the Bells Line of Road and back. Previously I had taken the risk and hit the highway all the way through to Blackheath, but this time decided that Saturday morning truck drivers were to be respected and feared rather than ignored. 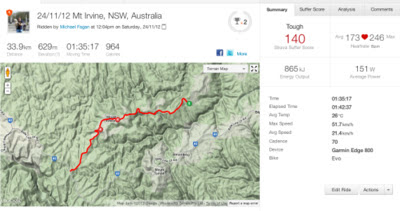 I had a great time and I hope to get a few riding friends up their as it's a good 90min ride with some lovely scenery and one of the few euro-style switchbacks I've seen since being home. I really do miss the dozen or so such turns up the forest road to Ballaison near Geneva. At this time of year it would of course be starting to get a little snow on the hill as you crest above the tree line.

The Cannondale probably will need a new chain soon as I'm up over 1500k's on her now. Myabe I should have bought one while the Cyber Monday sales were raging? No matter how well I maintain these bikes things like chains need to be replaced at regular 1500 - 2000k intervals.  If you don't do this you run the risk of breaking a chain in the middle of nowhere on a climb where the torque is greatest on the equipment. With this in mind I decided to take out the Pinarello on Monday here for a short run up to the park to do some intervals.

The Pinarello hasn't had the Easton EA 90 SLX's on it since I had them rebuilt at Brun's in Geneva. I'm a bit hesitant to rely on them given the problems I've had with broken spokes, but it seemed like a reasonable bet that going only 4 k's from home base would leave me with little more than sore feet if anything happened. As usual I had to replace the specialty carbon brake pads with my aluminium ones. If you've never done this before I advise you to take your time and follow these steps: 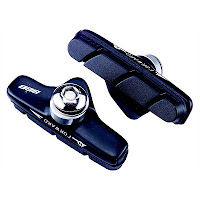 All went well and I was reasonable happy with the way the wheels rode. I was so happy in fact that I decided to strip off the old rubber when I got home and replace them with some new Conti GP 4000's I've had lying around the workshop. A good hour of cleaning and the old girl was looking a treat:

Check out the running gear because this is how a bike of this calibre should be maintained: 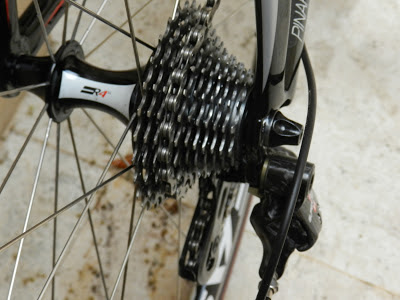 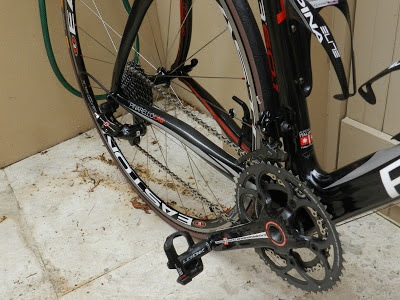 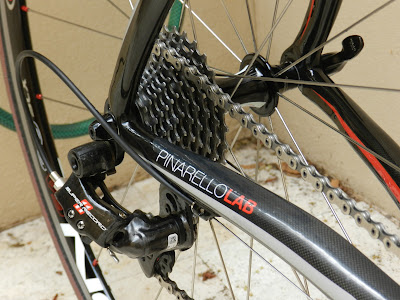