Ask for everything, but settle for what's reasonable and safe . . .

Nearly 60k's on my bike yesterday left me with lots to think about. Let's start with a question . . . What would a Greek exit from the Euro do to Franklin Templeton who now own at least €8.4bn in Irish bonds? Think about it . . . this means that this one funds management company now controls almost a 10th of Ireland’s entire government bond market. The search for yield knows very few bounds at the moment. For the investor the fact that Irish Government debt now yields around 4.6% v. more than 8% at the start of the year will no doubt leave some running to catch up and that running may unwisely push many to the periphery of the Eurozone in the hope of similar gains. OK then, consider this: What other investments exist in Europe that offer an appropriate yield and safety? I would suggest that direct exposure to the AAA property markets, perhaps in Germany, but certainly within that group of northern countries most likely to continue with some form of Euro based currency continue to offer some attractions. Direct investment can be difficult and costly, but if correctly constructed a portfolio of worthwhile properties can be constructed. Then again do you really want exposure there just yet?

Of course I've been bearish on the AUD for a while now and continue to be worried about slowing tax receipts and a government unable to make cuts in social policy infrastructure, Having said that the comparative yield advantages and lack of debt stress make it hard to see a major fall in the currency before the new year. At least a high AUD makes it easier for the Australian public to turn to online shopping to escape the various duopolies that dominate the retail sectors:
Local retail groups continue to make noises about growing their internet businesses, the problem is that mega-mall retail group Westfield has brought specialty shopping into the Australian cities allowing people to seek a wider selection of brands and better service than traditionally available. This combination means that smart shoppers are now seeking a better retail experience, that of course encompasses price and selection. The ruling that indicated that for the moment the Customs authorities will not seek to collect taxes on purchases of less than AUD 1000 virtually assured that the world had changed. In Switzerland the customs authorities collected even the most meager taxes on purchases made outside of the country. On more than one occasion DHL, Fedex etc. would collect from me amounts of less than CHF 10 on behalf of the federal authorities in order to assure Swiss jobs were saved. Of course it did mean that higher costs were built in making the country even more costly for people living there.

I noticed that shipping giant AP Moeller-Maersk CEO Nils Anderson told the FT that his group will not be investing significant amounts in the container shipping business during the next 5 years. They prefer to concerntrate on oil rigs and ports. Mr. Anderson told the FT that . . . "we have sufficient capacity to grow in line with the market." That to me sounds like someone is not willing to bet on a global pick-up. I obviously hope he's wrong.

I buy a lot of my bike equipment online. Even with priority shipping to Sydney I often find that I get what I want quicker and at a lower price. Where it makes sense I support my favorite local bike shop, but because of their size they can't carry everything in stock and often are forced to wait a considerable amount of time for something I can get easily from some of the European mega bike shops.

Their were some splendid bikes here on the road yesterday. I particularly liked the  Giant TCR Advance SLR that I saw when I stopped for a breather at Little Bay yesterday. 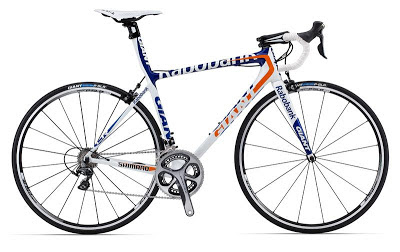 I'd never been taken with the Dutch flagged influenced colors or the geometry of the bike before, but it looked a lot better than I remembered when I saw it in the flesh.