Why would the Nobuyuki Hirano, chief executive of Bank of Tokyo-Mitsubishi warn against holding Japanese Government Bonds? Slightly suicidal in a financial sense wouldn't you say? The FT is reporting that according to data produced by the Bank for International Settlements (BIS), the holdings of JGBs by Japan’s banks equate to 900 per cent of their tier one capital, compared with about 25 per cent for UK banks’ exposure to gilts and 100 per cent for US banks’ exposure to US Treasuries. It seems ludicrous I know, but this is Japan and the long story of economic decline goes on. This is what happens after over a decade of ultra-low interest rates, the hurdle on investments becomes so low that even low yielding paper is hoarded like it was the formula to turn lead into gold. It also tells me that Japanese banks have run out of ideas. They've tried buying foreign banks and that usually fails. They've tried investment banking and even the experts in Japan such as Nomura find it nigh on impossible not to buy a dud like the Lehman's rump. What else can they do? They hold a ridiculous chunk of their capital in Japanese equities, usually taken on board to signify their commitment to a a particular company. They may as well just load up on Apple and Google. Is it any wonder hedge funds are lining up to short Japan?

I've seen many crowded trades in my investing life, short JGB's has been a particularly unrewarding one. I remember that every now and then we used to leg into a put back-spread for zero cost in the hope that Japan would suddenly abandon it's current fiscal policy and revert to something more normal. It was a dream about as likely to come true as winning the lottery. Some of these trades become so seductive because of their low cost. The other one that springs to mind has been betting on the China / USD or HK / USD peg to break. Everyone in hedge fund land has one of these and it's usually advertised to show a mythical pot of gold at one or both ends of your pay-off plots. Investors love them, but they rarely understand the costs both in theta bleed or in time and opportunity. It's worth asking about next time you're in an investor meeting.

China’s manufacturing PMIs are steadying above 50, meaning we have some expansion. Of course the expansion seems to be coming in the state sector and the SME's are actually retrenching staff. I'm not so concerned given that after all China is a communist state and it seems pretty natural to me that the state enterprises would be the first to grow. Having said that, you have to admit that as an investor state enterprises are likely to crush competition and margins, so I wouldn't be too flirty to economic growth numbers there just yet. Time will tell and maybe the leadership of China figures that if they hold on longer enough Europe will get its' act together and the US will not fall off the fiscal cliff. It's the only bet that makes sense at the moment.

Christmas is coming and China will be hoping that the seasonal goodwill can help their balance of trade numbers. Obviously the Japanese are even more exposed to any weakness. What I really want for Xmas is tickets for the Giro d'Italia (which at least would help the Europeans) as all the big guns are lining up for the start: Wiggins, Hesjedal, Nibali, Contador . . . It's going to be massive and will probably prove that the Giro is fast becoming the rider's classic. TdF is massive and the one to wine for the fame  and money, but for difficulty and the sheer guts required the Giro is rightly on an upturn.


The TdF seemed somewhat slimed down last year. Maybe that's a misconception based on the ease of Wiggins' victory and the dominance of team Sky? The Giro was harder in 2012 and thats' why in 2013 the TdF is playing catch-up with Alpe-d’Huez being climbed twice on the 18th stage. That's pretty awesome, but will it be better than the Giro where we always have the chance of seeing the riders cutting through the early season snow on the Stelvio: 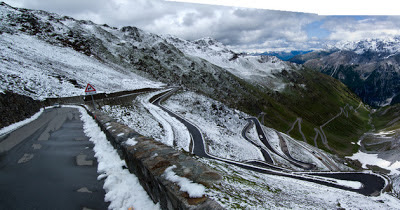 This will be my first Xmas in Australia for quite a few years. I have no sense of the season at the moment. I'm going to miss Europe this year as it truly is wonderful to have those winter feasts of seasonal specialities. I'm sure I'll find an alternative, but for me Xmas really shouldn't be about seafood and riesling, as nice as that is . . . it should be about game birds and cabernet. I guess that as long as you get to spend some time with family and friends the consumption side won't matter in the end.