Can it be a great day on the bike when you flat twice within 200m and lose a stack of pertinent data because of a failing speed sensor? I think yes. A great ride yesterday and fun catchinng up with some ex-UBS Australia friends. The thing that got me most was how well we coped with the morning traffic here in Sydney. We did the complete loop from Watsons Bay to Little Bay and home, so just under 60k's. Riding in our mini-peloton certainly meant our average speeds went up and we did some nice hill climbs. As I've said before Sydeny hills tend to be short and very sharp, sometimes I wish they were longer so you could just settle into a rhythm and grind out the miles. I'm not going to complain too much because it's hard to swap the Sydney weather for the grey skies of November in Europe.

Today I did some more training with my sister in law who is nearly at the stage where she'll be able to abandon the environs of Centennial park and head out into the traffic filled canyons of this fair city. Women seem to be taking to the new surge in cycling, perhaps part of it could be attributed to more female friendly equipment. Some of the retailers I know in Europe have told me that there's been a huge take-up by female cyclists of Shimano's newest electronic groupset Ultegra Di2. The theory goes that women unless specifically prepared have always found the mechanical gears on road bikes too hard to shift easily as they are created for bigger hands etc. Now with the more affordable electronic groupsets it means the gears change on the press of a button and leave women feeling more in control. I think the theory is correct. I know that changing from the small ring to the big ring with my weaker left hand requires quite a bit of force and clearly can result in a stutter in my rhythm. I'd like to go to electronic shifting, but it's hard to justify Campy's Super Record EPS at around 5 grand without factoring in that you'll probably need a new frame to mount the thing . . . .


I like it when people send me advice on business or cycling. I had to laugh when I received the following from a reader who obviously is concerned about the effects of having a cycling obsession: 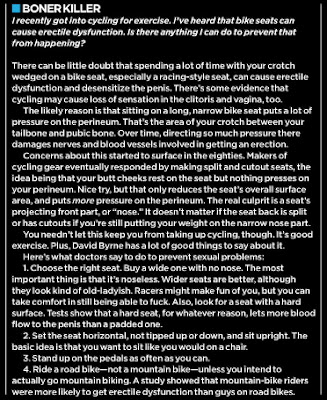 That comes from the latest issue of Penthouse Magazine and once again should prove that men really do read the articles. In fact, thinking about it, just how popular is cycling becoming when Penthouse starts to put it in their pages. Cycling is sexy, never forget that when someone is less than enthusiastic for your new found love of Lycra.

I don't like Warren Buffet much, I think the 2008 to now period has shown him to be perhaps just too clever. The image Buffet cultivated as just a grandfather from Omaha Nebraska battling the sharpies in New York via hard work and folksy investing sound bites doesn't wash for me. If AIG had collapsed and taken Goldman Sachs with it I wonder what Buffet would have been forced to do? Anyhow I can agree with him on the US recovery. Buffett has been buying up real-estate brokerages around the US as he bets on a housing turnaround. He is partnering with Brookfield Asset Management, a Canadian real-estate investor, to more than double the size of his brokerage business. To me this makes sense as did he's takeover of railways assets . . . we can argue about the price he paid, but essentially it was a bet on America which I agree with at the moment.

I'm not sure who's President matters too much to Mr Buffet, he's voting for Bernanke and his printing presses to help America inflate out of it's problems. I do wonder if Bernanke might like to return to academia rather than to continue, especially if he knows Obama will replace him with a like minded individual.

In Greece of course we've been counting down to yet another iteration of the bailout since we found out that the books just don't add up.This time the crucial date is November 27 when €31.3bn in aid payments are due. The point is that unless the Greeks can showed some improvement before the deadline then perhaps even the most ardent of europhiles gives up on things in the "Big Olive". Look a deal will probably get done as Greece is big enough to save . . . . but Spain etc?

A quick note about BHP. I said in previous blogs that Marius Kloppers like Icarus had flown too close to the sun. His failures to get several M&A deals done showed that he was long on number smarts and short on political ability. You can run a division at a major miner and get all the numbers right, but to run a company that sovereign nations see as competition to their own goals then you have to be Henry Kissinger in a hard hat ....

... and I'm sorry, Mr Kloppers is not that. Now the FT is reporting that BHP has quietly started looking for a replacement for its' CEO. The most damning sign that this was all true probably surfaced with Jac Nasser praising Klopper's for his performance only a few weeks ago, saying:

“We are very fortunate to have Marius as the CEO of the company, and he has been there for five years, and they’ve been five very, very successful years for us.”