I still take an interest in all things Singaporean, so when the short selling research house Muddy Waters targeted Singapore based trading house Olam I was interested in where this might go. Muddy Waters has been a fairly diligent critic of many of the asset holding plays in Asia over the last few years and in the case of Sino Forest a very successful one. I find their analysis a little thin at times, but the basis for their recommendations is usually sensible at it's core. With Olam the pattern is familiar; a low margin "clipper" of tickets decides that they can do things better so they start to accumulate assets in the hope of controlling the supply chain. Now there's nothing wrong with this so long as your free cash flow is strong enough to meet the debt servicing requirements of the gearing. The problem is that Olam seemingly is patching-up its bottom line by revaluing assets and calling this a gain. The trouble is not the revaluation in itself, but rather the fact that there is a temptation to revalue and then borrow more cash on the back of it, much like households in the US did during the housing bubble. Of course if your cash flow falls at any stage the banks are going to want to "close" on some of the assets in order to make good on the loans. The ponzi'ish nature of all this goes to Muddy Waters current case against holding Olam equity. I guarantee if you follow this one you will learn a lot about Asia and even more about how to do fundamental research on companies.

Given the current controversy surrounding Olam why not consider other areas where assets or inventory or being values incorrectly? Goldman Sachs estimates that non-performing loans at Chinese banks are approximately 9 times greater than the official estimate of 0.9%. A lot of people think that the GS number itself underestimates the real NPL's. Why does it matter? Well in reality the Chinese banks are propping-up unprofitable companies who are sitting on inventories that are being carried at "unreasonable" book values. According to a Reuters piece yesterday the motivation is political as governments, both central in Beijing and provincial are worried about the systemic risk of multiple bankruptcies in what is a country with falling revenues and increasing leverage. Reading the story it's stating to remind me of the early stages of the Japanese bear market when zombie companies were kept alive in order to allow lenders forgo the embarrassment of taking losses. That may sound unfair, but it's meant more as a warning, than a diagnosis of the situation.

The de-leveraging within the system still has a way to go. Some banks are rushing towards a restructuring, others are cautiously probing the way ahead like a soldier in a minefield armed only with a bayonet. The more I read about the CS restructuring the more I prefer it to the slash and burn at UBS. The cosmetic re-labelling of divisions is clearly meant to placate Swiss regulators while buying time to formulate a more measured response. I call it more a wait and see strategy. Here's a very good discussion piece from the FT today: The FT was lauding UBS yesterday and think CS will have to go further, with implication being that they are delaying the inevitable. Maybe they'll be proved right, but for the life of me I can't see the first mover advantage on this occasion unless you believe that rally in the UBS share price allows them a better chance to raise tier 1 capital than CS has.

It must be tough being a regulator in any industry. You're most likely to be fairly lowly paid compared to those you seek to control and if you're successfull your reward is to be hired by those that you were successful against. Of course if you're too successful no one will want you, so you're left in a half way house of report writing and backside covering. Take for example the latest re-hashing of allegations surrounding the dumping of Pierre Bordry, former head of the French national doping agency, who says that the President of France sacked him at the request of Lance Armstrong. OK, maybe it's true, but at what stage did Bordry ever cause a real stink about doping in cycling. Sure their were some minor successes, but when did he stand up in the media and say "I think we have a systemic problem here"? It looks like Bordry knew everything and sought to do a lot of clean-up work behind the scenes instead of going public. I know it's tough on Boudry, but sometimes the laundry has to be hung out in full view of the public in order to prove it's clean. 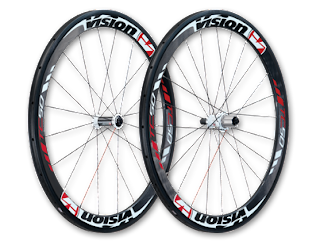 Cannondale has announced that they're changing wheel suppliers to their pro-cycling team from Mavic to Vision. I haven't ridden Vision wheels, but have seem them in the peloton. Vision is a division of FSA, so essentially this Cannondale going with a single accessories supplier aside from the group set which I assume will probably remain as SRAM . . . but even that's not clear yet.

And finally here's one for those dark days around Christmas in the northern hemisphere, Revolights:


Retail is $250. System weight is 12.3oz (348g). Battery packs are USB rechargeable and good for four hours of light per charge.