Something not so different ....

A slew of data from the saviours of the world economy the Chinese confirmed again that the global slowdown is real and with us now. The Financial Times reported that February exports fell 23.6 per cent from the previous month, and rose a slower-than-expected 18.4 per cent from the previous year. My Aussie brothers will probably prefer to point out that iron ore imports remain strong, but I'm not buying it and neither is the market today.


Back on the March 5th I pointed out the reduced expectations for GDP growth amongst the Chinese leadership. These latest numbers are confirming what Premier Wen knew when he made his pronouncement of a 7.5% GDP target. At the time we were still gripped with Greek bail-out fever and the market seems to want to believe that an increase in money supply was likely to be the result. I believe the only thing we have had confirmed today was that the Chinese economy has lost all its balance and it remains likely that the victim of a rebalance has to remain the construction sector. If Chinese exports continue to be under pressure it seems unlikely that the strong demand for iron ore, copper and oil can remain at the current levels. 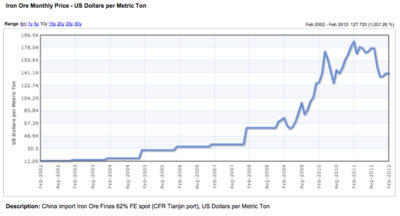 I stopped in at Jean Brun with my damaged wheel. Father and son looked pretty bury this morning and were working on several newish looking bikes. Happily JP saw no great problem with the state of my rear Easton clincher happily putting it to the side and confirming that there shouldn't be problem. I hope my new 12-27 Campagnolo cassette arrives soon so I can have it attached to the Eastons and do some training rides on it before the Gran Fondo.

Exercise today was confined to the gym, which at least allowed me to catch up with some podcasts and an audiobook I've been listening to.