Sayonara Elpida . . . slowest horse in the race . . . and trouble for cyclists in Sydney

I once met the CEO of Elpida, the Japanese DRAM maker in an office in Sydney. At the time they were doing an IR roadshow about a new JV with a Taiwanese partner. The story was fine, but the dynamics were less so. Even in 2006 you could see that the pace of change was nowhere near what it had to be. In typical Japanese fashion it was all about stage 1 completion date and waiting for signals before stage 2 could start. It was a case of missing the point that DRAM production was a race to the bottom ... who could be the lowest cost producer the quickest. The CEO still believed he was adding value in some way to the end users, he thought he was in charge of Hermes, when in fact he was running Woolworths. So this week we see the delisting of Elpida from the Tokyo stock exchange.  I don't know off the top of my head how many share placements Elpida transacted between 2005 and 2011, but I bet its close to one every 20months. The only cash they were generating was through the sale of worthless share script. I kind of feel the same way about the screen industry. I remember when Sharp opened their state of their state of the art facility at Kameyama around the same time I met Mr Elpida. I was sure it would be unbeatable, but Samsung matched them straight away. Sharp changed their tune from quality to quantity pretty quickly. So quickly in fact that Sony spent countless investor hours talking about how it was the behind the screen technology that mattered more than the screens themselves. The truth is that its just another industry in the race to the bottom and if you believe otherwise you are going to be disappointed.

Another gym workout as taper towards Sunday. I'm really starting to feel quite relaxed about the prospect of a few hills in Italy. I should mention that I joined the Sydney Cyclist website today in preparation for my return.They had a cool instant message forum and I asked a few questions about cycling back home.

Recently there's been some half baked campaign against bikes in the city lead by Murdoch's Daily Telegraph. Check out the ugliness in these comments from the The Telegraph in Sydney in relation to a story about a vigilante driver hurling batteries at cyclists who dare be get in his or her way: 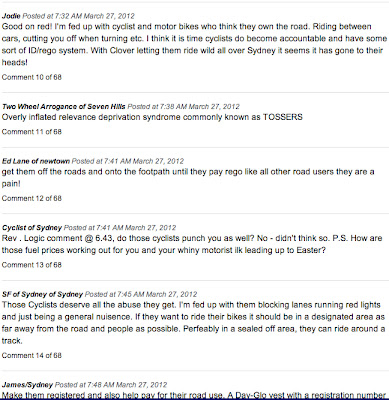 It's kind of interesting that Murdoch managers are taking this view as in the UK The Times is running an aggressive pro-cyclist campaign in the face of a series of deaths of cyclists at the hands of motorists.


Additionally there is the irony that Murdoch's son James was instrumental in setting up and sponsoring UCI world tour team SKY Procycling. I wonder therefore when the Telegraph.com.au will stop promoting the petrolhead line. Maybe after they get the word from Rupert himself?