Post game press conferences for everyone . . . and would you want a Guru? 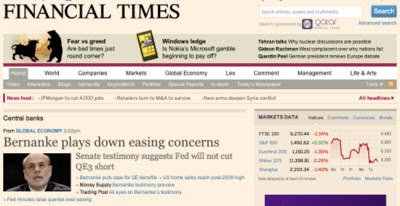 The headline should read: "Fed President unwilling to let markets drop for more than three days." Bernanke did his usual thing and dovishly played down the suggestions contained in the Feds own minutes that the day of reckoning was any closer now than it was a couple of months ago. The S&P500 thanked him and crawled back into the green for the day in what will probably spark a few relief rallies in Asia.

On 21st February when the Fed minutes were released “many” of the 19 officials who attend the rate-setting Federal Open Market Committee “expressed some concerns about potential costs and risks arising from further asset purchases”. So what can I take away from Mr. Bernanke yesterday who said:


“To this point we do not see the potential costs of the increased risk-taking in some financial markets as outweighing the benefits of promoting a stronger economic recovery and more rapid job creation.”

So is this Mr Bernanke "winging it" away from the clubhouse. If this was a sports team we'd be talking about mixed messages and a divided locker room. What a mess!


It's much the same in Italy with many commentators now calling for a Grand Coalition similar to the one in German in the mid 00's. Maybe with the right coach in charge it could happen and of course nothing would get done. Brussels and the IMF might actually prefer a nothing coalition that would be divided and unable to fight the drift to non-representative "technocracy" as represented by Mario Monti?

Central bankers such as Bernanke do not seem to have a problem with the deterioration of risk assessment in these markets, but some agencies and governments still disagree. The European Banking Authority said on Tuesday that it estimates that some banks have up to a 70 percentage point lower risk weighting across their credit books than their peers, and that only half of the difference is due to easily explainable factors. What do we make of this? Well as I've said before, the best place to be in a bank during a crisis is in the room where all the crap assets are held because you can mark things according to an agenda rather than on where they probably are. This works on the way up as well as on the way down. On the way up just because a piece of paper you hold trades at (say) 70cents in the dollar doesn't mean you have to markup your own holdings to that level. Excuses such as: "It was only 250k and this is part of a billion dollar issue of which we hold 100m are commonly used. What this of course means is that no one knows the real book values of banks until they liquidate the questionable paper and sometimes they never do. I'm not surprised that the EBA can't find a consensus on risk adjust valuations.

The Chinese have the same concerns as the EBA. According to UBS China's shadow banking system accounts for no less than Rmb13.6tn ($2tn), or about one quarter of 2012’s GDP, and could be as big as Rmb24.4tn, or nearly 50 per cent of GDP. This means that Chinese regulators have little control of the real leverage in the system. When China Trust Co's sell paper to investors backed by loans to real estate developers or coal miners etc. you start to see a Ponzi-like symmetry to the risk still in markets. Therefore today came news that China would try and slowdown some of the activity of these intermediaries. Of course, like Mr Bernanke they don't wish to panic markets, so there's lots of talk about reigning things in rather than stamping them out. Clearly wiping out 25 - 50% of your yearly economic activity would be akin to a suicide, but doing nothing leaves the system dangerously exposed to a collapse in confidence. Remember that Ponzi schemes work until enough people question the ability to be repaid, Madoff's being the best example recently.

Investors can probably be relieved that Bernanke has said what he said, because the markets will now again discount things. If Italy gets a grand coalition and if China says business as usual then it's game on and we can once again see how many walkers a tight-rope can hold.

I'm riding up this morning for a meeting in Paddington to discuss a charity bike ride. I'm not sure which of the bikes I'll take out, but the clouds here look fairly benign so the Pinarello's carbon wheels are a distinct possibility. One thing I did spot recently that made me green with envy were these Guru branded THM Claviculas cranks: 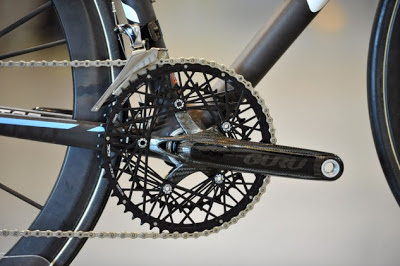 They come as standard on the new Guru Photon HL. You don't see as many Guru bikes around as you used to and here in Sydney I seem them mainly in their aero TT guise being used by the triathlon crowd that laps Centennial Park ad infinitum. This one looks pretty cool and at under 11lbs it's astonishingly light. I looked up some of the components and lets just say that if your over 80kgs you better find another mount. 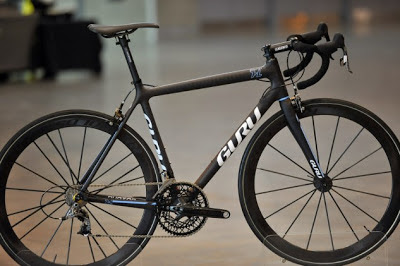 That of course doesn't mean that you can't admire one if you see it.