Readers of this blog know well my interest in the spiralling costs associated with education and health. In the past I've mentioned the bubble in US student debt and alluded to other countries which have a similar cost spiral. I thought the NY Times on weekend had a typically good piece on education in the US. To give you an idea of the inflation in the US tertiary system the Times gave the example of Appalachian State University (NC), where a degree can easily cost $80,000 for a state resident, including tuition, room, board and other costs. 40 years ago the total was about $550 a year. With inflation, that would translate to just over $4,000 for each year it takes to earn a degree. The problem with tertiary education is that governments of all colours have effectively bribed the middle classes with cheap education loans and it is this cheap money that has caused the spiral in costs. 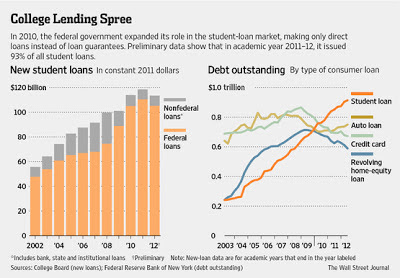 Think about it this way, if you print money and hand it out for free you flood the system with worthless cash. At the same time if you lower admission standards as has been the case noticeably in the UK and NZ then you create the environment where the universities have very little incentive to do anything but expand into areas that used to be covered by trade schools and polytechnics. If governments cut back quickly on this free money they risk a) a voter backlash and b) bursting a bubble (effectively now a ponzi scheme) that would carry the US middle class back into recession.

It's taken a while but as I said last week the pension industry is fast getting its' own education in the securities lending or stock banking business. First it was Blackrock, now comes the news that State Street is getting sued for similar reasons. The FT says that State Street now has $2.1tn of assets under management and $23.4tn under custody and administration, so even though the lawsuit in question comes from a tiny pension fund (assets less than 100k) the ramifications could be significant. Apparently State Street has received a 50% fee for revenues generated for stock lending from the fund's holdings. I know the State Street will argue this has more to do with the size of the portfolio (i.e. it's more like a minimum charge than a commission at this level) than with the actual fee charged in this case. My own thinking with the electronic management of custody the actual costs to managers should be decreasing and what we're now seeing is the death of the old fat margins business; it's as though Henry Ford was able to convince the world that Model T's were hand built by artisans rather than mass produced . . . eventually someone gets into the factory and works out the real cost of production and either copies it and charges less or exposes it and forces them to pass on the benefits to the consumer.

Are investors educating themselves on the risks in the bond markets? If you believe like Neil Dutta, head U.S. economist at Renaissance Macro Research LLC, that U.S. economic growth will be three percent "or more" this year, than you probably also believe that QE must start to cool. Mr. Dutta is no uber-bull, but if his J-curve effect comes into play and we see a switch into risk assets then how can you sit in bonds? Last week comes the news that investors pulled $1.2bn from US junk bond funds in the week that ending Wednesday, and the money was redirected to funds that invest in loans, which pay a floating rate of interest.


This of course provides some insurance as to the turn in interest rates and says to me that at least part of the investing world has woken up to the risks of sitting in lower credit grades. Add to this the pick-up in M&A I wrote about last week and you'll soon be seeing lots of new paper hitting the street with higher coupons and perhaps better seniority.

I'm educating myself more on my cycling training. If you're like me you'll probably go through the following training progression:
I've progressed through the first four of these and now use measures such as the Strava suffer score to approximate my riding effort. This is far from scientific and lacks in it's ability to zero in on effort and improvement. Until now I haven't wanted to commit to a power meter system because of cost and weight. For those not familiar with power measurement you traditionally have two ways of getting a measurement: a) a specially made wheel with hub based measurement or b) a crankset with a similar instrument. Either system is going to cost at least $1500 and for my bikes probably closed to $2500, so it's not a no-brainer for the amateur gentlemen rider. There's been a couple of lights at the end of the tunnel, the first has been pedal based systems which Polar and Garmin have been associated with, but are still around $1000, the other is the CycleOps PowerCal heart rate estimation system. It's the CycleOps PowerCal system I'm more interested in as it is close to $100 depending on what extras you want.

The main thing to know is that it's an estimation, so in short bursts reviewers are saying it won't give you an accurate read-out, but over a longer ride within the limitations of the algorithms inputs you'll get better numbers. As I'm no Mark Cavendish my wattage under a 300m sprint for gold is really not of any great interest to me, rather I just want to see my efforts and where I can improve consistency on my rides. For 100 bucks I'm going to give it a go and see what it comes up with as I could use some education.

No ride for me today as my legs have had enough. I managed about 215k's last week, which is pretty good when you consider I rode with newbies on 4 days out of 7. Don't get me wrong it's nice to share my love of cycling with people as it brings a whole new level of satisfaction to the effort you put in. I know for example that I was a horrible partner to ski with in my 20's when I took up the sport, so I feel I better understand the frustration of people taking up a sport latter in life . . . at least I think I do?

In Sydney my average ride is about 30k's, whereas in Geneva I averaged 50 - 60. The traffic situation in a city of 4.5m makes the stress and concentration required to ride pleasurably much more difficult. Getting out to Akuna Bay last week was fun even with the fact we were late back onto the road and had to put up with the 3pm Sydney school pick-up and tradesmen dash on the roads. Next time I think I'd prefer to drive out closer to the national park and do the hills twice instead of braving the enormous utility vehicles that ply the roads of Sydney's northern beaches. I feel fine but with a forecast for thunder storms and a multitude of chores to be done I think it's best to take the day off.