I've been pretty much in worry mode since Friday when I found out that the "braze" that holds the front derailleur on my Cannondale Evo Supersix had cracked. It's hard to work out how this could have happened, but I suspect that the cable was too tight and that under load last Wednesday the various forces came together to crack the metal open at the bottom of the slot. Luckily the frame itself is undamaged. 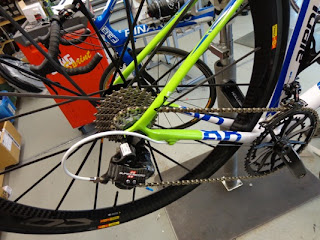 There is some good news because I called City Bike Depot here in Sydney and spoke to Brian about things before calling the Cannondale supplier (CSG) direct. It seems they've seen this before and he told me to bring it in and speak to the head mechanic. A relaxed Scotsman known as Al was a bit pessimistic at first and like all tradesmen in Australia wanted to talk down the chances of fixing it. The original diagnosis was "new frame" and warranty not covered internationally. I kept my cool and prepared for the worst as Al got on the phone to CSG to discuss the problem. I was surprised when I got the answer that CSG was sending over a new braze kit with the instructions and my costs would have to cover stripping out the bottom bracket etc. I asked Al how confident he was of fixing it and he didn't flinch and said it should be alright. So I promised the boys a good bottle of Italian wine if they fixed this as I'd really like my bike back and ready for my trip to Orange with my club on March 16th.

Just out of curiosity I stopped by to see Mike Shaw at Atelier de Velo to discuss the Cannondale with him. He said it happens now and then and that sometimes it's easy to fix and other times as with Giant frames it can be a long fiddly process because one of the important pieces of the puzzle is what backing there  is inside the down tube. I guess I should have some faith in the process given the number of high end bikes in Sydney now days. Mike even told me that some new bikes come with lose brazes that require a retro fitting before going to a customer. I'll keep my fingers crossed that all goes well.

Going through this carbon fibre nightmare I was starting to appreciate Boeing and other aircraft makers problems when engineering and constructing composite materials. There are only three rivets on my carbon frame and if failures are not uncommon what should we conclude about the process of building a 787 or A380? The fault checking must be a nightmare . . . imagine the consequences of failed riveting on an airliner.

In the late 90's a number of large corporations adopted six sigma method originally developed by Motorola in 1985 as part of their overall corporate structures. GE under Jack Welch were probably the most aggressive users of the science in which 99.99966% of the products manufactured are statistically expected to be free of defects. Generally it all makes good sense and I was once presented with a thesis at a UBS managers briefing that spoke about the elevation of our back office from three sigma to five sigma and the associated cost savings. In general terms we often found that hiring extra process staff equated to greater savings from "failure-less"document production. The problem of course was that once the process starts to be executed at a higher rate management are often lulled into a false sense of security in respect of what is achievable. Thus in the current environment with off-shoring of processing and pressure on human associated costs upper management often feels more can be done with less without sacrificing production.

The greatest example I can think of regarding a processing failure was the implementation of robot signing technology in the US mortgage market. It was a classic case of seeing a documentation process as a manufacturing process devoid of human input. The problem is, as many institutions found out to their cost, that the courts see each step along the way to a mortgage as a check and balance. In other words the idea that a bank representative is in a room when you sign is so he can ask you "do you understand what you're doing?" In fact there are a whole set of cooling-off provisions also within many contracts. I once had a manager say to me: ". . . look we're just trying to build a product factory here . . .  just get the thing done and make sure we can replicate it . . ." So much for that.

Finally in case you're wondering why I haven't said anything about the sequestration crisis I would say because no one would listen. The markets are assuming that this gets solved sooner rather than later and the most optimistic of commentators are suggesting that we get a simultaneous resolution to the soon to be faced debt ceiling talks. Of course maybe they're wrong . . . ?