They'll always be an England . . . so gear up and ride

Mondays are always a bit disconnected in Australia. There's lots of weekend news, but without the big boys the local market takes some time to get up a head of steam. In the spirit of that I suggest listening to this week's BBC History Extra Podcast (21st February). Why you ask? Well the podcast in question starts with a piece on government investigations of the Bank of England in the 18th Century.


Hit here for the Podcast

I guess point is that the more things change, the more they stay the same. I also thought it was particularly apt given the Moody's downgrade of the UK. My own feeling is that the UK has disappointed itself. It defies conventional thinking that Sterling can be as weak as it has been and it still hasn't had the export led bounce that many including myself have expected.  Here's a chart of GBP against various currencies. It looks to me that the 20% advantage that the devaluation has given the UK has been wasted. 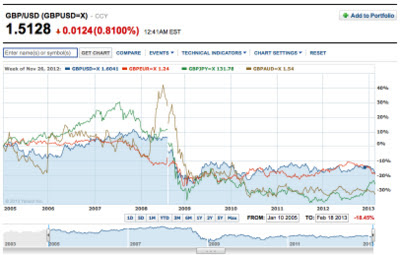 What is it about an economy rich in engineering and technical prowess that is producing so little that the rest of the world wants? I want to believe the UK will get out of this, but I fear that Osborne could be jettisoned on the fires of a Keynesian solution.

Mario Monti the illegitimate Italian Prime Minister is having a few problems getting re-elected,or should that just be "elected". You see the funny thing about democracy is that when people have it taken away from them they get a bit upset. Brussels and the IMF can do as much cheerleading for Italy's ultimate "grey man"as they like and it will count for absolutely nothing if Monti falls. The protest vote therefore is the key and people look likely to use it. 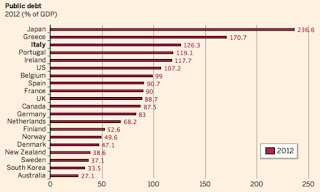 Of course the Italian situation is similar to that of the UK. The export side of the economy is just not working. Combine this with the straight-jacket that is the Euro and you can see that getting out of the current malaise looks difficult at best. 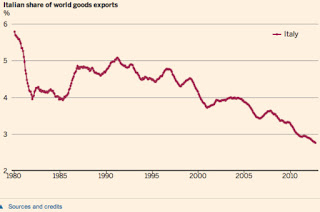 Japan and Italy are two sides to the same coin. Having said that the Japanese at least have their own currency to debase and don't have to rely on others to help. It looks like ADB President Haruhiko Kuroda is likely to be the next head of the BoJ. The JPY as I write this is back over 94 after the leaks came thick and fast. The commitment to weaken the JPY is truly of samurai (or should that be Kamikaze) proportions. Japan struggled through much of the 90's and 2000's with a weaker JPY then they have now and they still remained mired in de-leveraging from their hubris of the 80's. Perhaps Japan should have done this earlier . . . . or maybe the west should have learnt from Japan and avoided this disaster in the first place.

A mate of mine sent me a new app suggestion for my iPhone. Bicycle Blue Book is a site that gives you a valuation on your bike in case you want to trade it in for a new model. My thought is that this is likely to be used for insurance valuations and I'm not overly in favour of it. I don't need my bikes constantly valued. For example I looked at an old Colnago that was for sale on the local bike trading website. 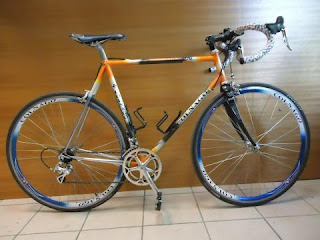 I'm not going to buy that bike for anything but pleasure, for me it's similar to my wine collection . . . I own these wines because I intend to drink them myself. It's a good idea . . . but please don't get obsessed by it as car dealers have with a similar app. Thanks Si.

I got out on the rainy Sydney weekend for a Sunday ride around the beaches. This coming Sunday I've volunteered to be road crew for my wife and sister-in-law at the girls only event at Sydney's Olympic Park. I've dusted off the stop watch and whistle and expect big things from the girls. If you're also taking a person of the female variety to Gear up Girl then stop by at my mobile workshop to compare torque wrenches and Strava data.