On this blog I'm always running into the problem that I have a large readership in the US and non-Commonwealth who don't always like the spelling vagaries of the English language. We all know that our American cousins hate "u" and "s" where no letter or "Zee" seems more appropriate to the spoken word. And don't get me started on tyre / tire! I have no hard and fast rules, so I'm going to mix it up as a lesson in confusion . . . sorry.

As predicted on this blog nearly a year ago Marius Kloppers is stepping down from BHP. I bring this up because of my recent posts on M&A being the new driver in markets. Kloppers failed twice when attempting significant deals with Rio Tinto and Canadian company Potash, additionally he'd over paid for shale oil assets in the US. Jac Nasser the Chairman had lost confidence in Kloppers who failed to understand local sensibilities and competition regulations when attempting the two big deals. BHP is now a lower growth cash-cow restricted by infrastructure costs when building new projects such as the mothballed Olympic Damn expansion in South Australia and by regulators when trying to grow by acquisition. One wonders if it might be best for shareholders if the company was split into its various divisions so as to cast a smaller shadow on the world stage. Obviously Iron Ore is the loser in that scenario as it remains a behemoth unlikely to be given much room, while still needing to raise significant capital for new projects. I am also guessing  that the board would argue that the company offers a smoother revenue profile by being diverse, but honestly without the accounting magic is it really? I expect Kloppers to pop-up on a couple of boards . . . at least he offers experience on how not to get things done.

I heard an interesting interview on the BBC yesterday concerning Latin America. Without going into the details I thought the comments in respect to Chinese expansion of commodity holdings were interesting. No surprise then when the FT is running with a story on the expansion of Chinese oil interests to a level where they will produce 3m barrels a day abroad in 2015, almost double their 2011 overseas output of just over 1.5m b/d and equivalent to Kuwait’s annual output. China is a bit like BHP, too big and rich to ignore.


Given the pollution situation in China it seems unlikely that the old 10% per annum growth rates can be sustained. There's a limit to everything and sure if you're an auto executive you might not worry given how few cars per head there currently is, but you should. People maybe be dumb sometimes, but they're not completely stupid.

I've said it before and I'll keep saying it, hybrid bonds should be in your portfolio, but then again there could be exceptions. The Co-Contingency bonds or "CoCo's" recently issued by KBC at 8% and Barclays at 7.625% each feature write down to zero once the bank’s common equity tier 1 ratio falls below 7%. Now this is a very strange phenomenon in the bond world because traditionally within corporate capital structures bonds rank above equities in the case of a bankruptcy. Even in the case of CoCo's the tradition has been that the bonds are exchanged for equity when the barrier is breached. But in the case of these bonds you get wiped out! So the bonds are worthless even though the bank remains a going concern. I do not like this structure and only the most sophisticated investors should have these in a portfolio. This is far worse than the Japanese resettable convertible preference shares I have written about previously and I would go so far as to say that this structure is a direct consequence of QE and general central bank put option theory now in the market. This is the ultimate evidence that risk no longer seems to be a factor.

To prove that I'm not completely out of touch I decided to go through the motions of how to price the barrier option embeded in the above CoCo bonds. The first thing I did was pull out historical information as to what Barclays tier 1 capital has been. Then I mapped it against the share price. Why? Well because I wanted to work out the correlation between tier 1 capital and the shares, because I need to judge the bonds worth daily as opposed to quarterly when the official tier 1 is published. Also you want to know at what point it's worth shorting shares against your bonds. For example say Barclays Tier 1 moved down from 9% to 7.5% in a quarter? You need to ask what effect that has on the shares historically and does it stabilise as management retain earnings etc and take restructuring action or is there a propensity for it to fall further. Does shorting the shares help if you can't sell your bonds? Then of course you have to know what happens to volatility at this stage, so you could use a jump diffusion model that is essentially a modified Monte Carlo simulator. Look without going into it this is very complex and just by me writing down this small number of factors should tell you that without the proper quant analysis you should avoid CoCo with the death cliff feature.

I managed to do some riding in the Mt Wilson area about 3 hours from Sydney over the weekend. Cycling in the Australian countryside is rather different from the Swiss and French Alps. Here I managed to miss running over a black snake by less than a metre and a Wallaby by less than 10 metres. I can't remember ever seeing such exotica on a ride in France, though I was once chased by a guy near a gypsy camp who decided that I shouldn't have been witness to whatever they were packing into the boot of their car. I still have the strava track of that ride somewhere I should look it up and look at the reading from the heart rate monitor . . I bet it jumped into the high 180's!.

I decided enough was enough for the Mavic tyres I had been using on the Cannondale, they were just too soft and the ride on a debris strewn road in the Blue Mountains only served to confirm this.

I changed over to the Vittoria Open Corsa Evo CX II's that I got on sale last week. I took them out yesterday and immediately got the impression of a more solid road feel. I doubt whether there was much of a speed difference and that suits me fine. 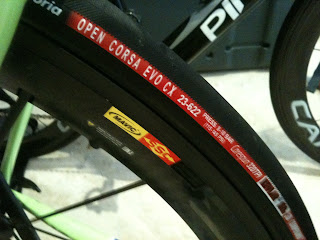 My new Fulcrum Racing Zero's have finally arrived at Attelier de Velo. It took 3 weeks and I honestly don't blame the guys, but once again you have an example where the Australian importer is slack and probably hasn't improved shipment times since the 90's. As with many things "down-under" the consumer has always been told take it or leave it. The problem is that the consumer now has a choice. Items that have a value of less than a $1000 can be sent in tax free because the government has said it costs more to collect the tax than the tax itself. I'm sure that they could work out a more efficient system like they have in Switzerland where they make it the responsibility of the courier companies, but they haven't so the winner is the online retailer. I want to support my local bike shop because of the service I get. I know I could have saved around 25% buying these wheels online, but because I'm a bigger rider and things can go wrong on even the most solid wheels I decided to pay up so I could have an iron-clad warranty. Mind you if I lived in the UK and bought these on Wiggle I'd have a very good warranty and still save the 25%.

In case you're wondering bikes imported from abroad into Australia attract a 10% GST on the bike cost and for some stupid reason on the portage. There is no large bike building industry in Australia. Sure there are a few guys doing custom steel frames, but even the locals have worked out it's cheaper to design here and manufacture in China or Taiwan than actually set up a factory in the country.