Thanks Lloyd for agreeing with me . . .

Thanks Lloyd for agreeing with me. Even the king of traders can see old school M&A leading the US now that money is free. More evidence regarding this fact comes from today's news that Comcast is buying out GE’s 49% in NBCUniversal for $16.7 billion, more than a year ahead of the date planned when GE and Vivendi sold the US cable operator a majority stake in December 2009. OK, so it's old M&A, but they're completing it early which shows confidence in things. It's also good news for GE which will now use the 18bn on their balance sheet to accelerate the buyback and invest in their industrial businesses. And it's that investment portion that will drive the M&A because GE will probably acquire bolt-on businesses which will in turn predicate the trickle down of what Mr. Blankfein is saying.

Europe is still well behind the US on the road to recovery and news yesterday is that the number of new vehicles sold in European this year is expected to shrink to 12.3 million, a 20-year low. Goodyear and Michelin cut their outlook for their European businesses. The cycle of cash for clunkers has run it's course and Draghi's low credit terms haven't trickled down to the retail customer in enough volume yet.

During the 18th century the UK government consolidated its debt into a single perpetual bond that has been restructured, but never cancelled or repurchased. You can buy these bonds and they currently pay a coupon of 2.75%. The point is that governments now have to think about doing the same. In addition they have a huge bubble for the retiring baby boomer generation who could use some guaranteed annuities right now. I expect that governments will and should look at this again given the absolute rates. Would I buy them . . . no, but if I was well into retirement I might.

Following on from yesterdays comments about Canada and the great Canadian short trade I happened upon the news in the local Sydney newspaper that the number of people living in the state of New South Wales (capital: Sydney) looking to buy their first home fell to its lowest level in 21 years in December. Governments in Australia are obsessed with voters buying homes and pander to this in various vote buying schemes. The fall coincides with changes to first-home buyer incentives, which was withdrawn on October 1 for purchasers of existing homes. It was replaced with a $15,000 grant to buy a new house or apartment priced below $650,000. Senior economist at Australian Property Monitors, Dr Andrew Wilson, said:

I guess this is good news for many of the bears on the commodity countries who believe things are way over heated. The trouble is that once again without employment collapsing there's not much of a trigger.  The best you can hope for is that the Australian dollar slides back into the 90's as the RBA cuts rates and the value of the Yen carry trade takes a hit.

I spent some time today cleaning my Pinarello and am looking forward to taking her out this afternoon. I last rode the Pinarello in the rain last week and it was surprisingly dirty. When you start cleaning a bike it's always hard to stop. It's amazing what over use of lubricant can do in terms of attracting dirt and road debris. I had to get into the rear derailleur with an old toothbrush to clean things out. I tend to use Rock 'n' Roll Gold chain lube as it's a dry lube. 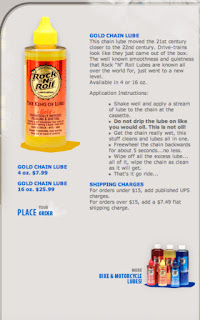 Maybe last week I should have used a wet lube. For readers not familiar with the various lube types the heavier wet lube repels water, where the dry lube can be washed off in the rain. I only ever used wet lube in the winter in Switzerland as I'm a fair weather rider at best and prefer dry lube when possible. It's always worth trying a few different types so as to decide which best works for your training.