Bankers finally got their Christmas wish. Michael Dell is doing an old fashioned LBO in partnership with Silver Lake. It's a classic for the text books and in my view the only thing that makes it really interesting is Microsofts involvement.

According to the FT sector analysts reckon that Dell still gets 70% of revenues from the dying PC sector. The problem is that Dell needs to switch a huge chunk of this over to mobile devices, but may not have the cash to do so once the bankers carve out a huge chunk of interest every year. Thats why Microsoft is crucial. Dell has never been an innovator, instead his always been about the supply chain, he's Tim Cook (of Apple) with a Texas smile. He's going to have to rely on the hit and miss Microsoft "skunk-works" to come up with the product. Surely the end game here from a Seattle point of view is that Microsoft has once again got a little "pregnant" and bought an option to either move further into hardware or to block someone else from doing so. Michael Dell himself will either end up retired watching his Texas Longhorns or become a large shareholder in Microsoft . . . stay tuned for that.

All of this is great news if you're an investment banker in NYC with a big mortgage a couple of kids at private school and a wife/husband/partner who spends like a drunken sailor on leave. The winners so far are:
In my view this will kick-off some serious late nights for investment bankers who missed out on this fee bonanza because what it signals are the loan books are in business again. This is the most bullish thing I have seen for equity markets in quite a while and could start some serious deals that will propel the markets higher.

So that's all the good news, but lets visit the ivory tower that is the US Federal Reserve. If I'm Ben Bernanke I'm seeing this as a sign that what I've done has worked. A couple more deals, hopefully of a similar size may allow me to start withdrawing slowing from the credit markets. You see by virtually wiping out the questionable MBS books run by the banks I've injected them with so much cash that they now have balance sheets capable of taking on risks such as the Dell deal. Of course Mr. Bernanke will be hoping that legislators will give him and his fellow central bankers the power to stop this from becoming a new bubble. The jury is going to be out for a while on this, so grab a spreadsheet and start your engines for a summer of fun.

Do you know what lawyer tabs are on your bike? I certainly had no idea about them until reading Velo News today. 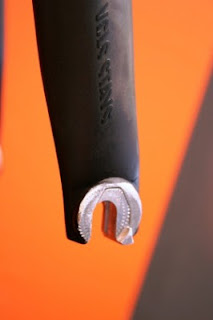 I should correct that . . . I have seen this little metal piece nearly every time I take off my wheels, yet had never wondered why it existed. The idea is that this little nob stops your \wheel falling out unless you actually release the skewer and then give it a couple of turns. If you file off this piece you end up in the situation where you just open the skewer and pull the wheels out. This is what the pro teams do, though apparently the French teams are prohibited by law and I bet insurance companies. Not the UCI will enforce the no tampering rule which means a lot of new forks are going to be needed. I don't have a view on this either way, but if you're an amateur like me they really are something you can forget about . . . treat this like a fun fact to bore your non-cyclinng friends with at your next party.

Finally check out the finish from yesterday's Tour of Qatar 2013 Stage 3. This is what happens when you have a nearly dead straight road and some very good sprinters in the peloton: