I finished yesterday's blog just as more action was hitting the tape in the M&A world. This time Liberty Global has gone after the UK cable TV market via Virgin Media. The deal is worth just under GBP24bn. It's got some kinks in it, not least of which is the part offer of some non-voting shares in exchange for your VM shares. The FT says that the price looks a little low at 7.5x EV. Now I may have at one time traded a few News Corp shares, but I'm no valuation guru. I always thought that unless the target was a dog you wanted to get the price up to around 9x to make it a palatable. This raises the spectre of some proper fun for the risk arb books, or rather the risk arb funds out there because the prop books at the banks are supposed to be insignificant (which I doubt). Risk arb is always attractive and so long as you are happy that the board at VM will roll over and you can short some Liberty Global non-voting shares you should be able to lever up enough to provide some decent returns. This deal prima facie doesn't look as though it will have any problems with the competition regulators as VM is a clear number 2 in the UK market and is being acquired by an entity with minimal UK presence.

This brings me back to my blog on Monday about ETF's. This is a great example how the ETF market generates additional fees. There's probably a lot of Liberty Global shares held by the likes of Blackrock that will now be available to the market via the stock banking desks. It may have been a while since I traded risk arg but I know enough to guess that the first tranche of shares I could borrow from my prime broker in a deal like this wouldn't be coming my way at less than 3%. If the deal gets really hot and if there are already other instruments out there to be hedged (such as convertible bonds or even a voting v. non-voting share arb) then this fee will soar in the next few days. The holder of an ETF gets none of this benefit, whereas if they held the shares they could have pocketed the fees themselves by lending the shares out to the market . . . but that of course requires infrastructure etc. Now do you see why the ETF lawsuit is likely to be very interesting for the banking community in general?

As I said yesterday I expect the LBO world would start to light up like a pinball machine post the Dell announcement. Today the leaks began because any banker not involved probably got marched into a meeting to explain a) why? and b) what they have in their deal books. The first rule of investment banking is where you can't create destroy. Therefore the leaking of the negotiations behind the possible £10bn bids for EE, the UK’s largest mobile phone operator, in what would be the biggest private equity-backed acquisition in Europe since the financial crisis. If you're in the deal it's unlikely you want to leak the details unless you're pretty confident that you're ready to print the deal. Of course you might leak to build more moment to either get the price up or force the hand of recalcitrant debt syndicate members over the financing terms, such as: " . . . this deal is going to get done with or without you. Banks are scrambling for this and you're going to end up watching this debt trade much better in the secondary market and  you will having to source it there where for a lousy 20bps you're in a prime position . . . " etc, etc.

The $/¥ hit 94 last night and the N225 roofed 3.8% in what must be some serious short covering. I wrongly thought the currency would have hit a natural level around the 91'ish mark until we saw some serious economic numbers to support the Abe quest to out-print the rest of the world. What I should have guessed was that I would not be alone in such thinking and the shorts got lifted and the computer algo's in turn hedged by buying the N225. Oh my, if you're leveraged short on a day like today you probably just undid a lot of the good work you put in by buying the N225 at 8 or 9,000 and running it up to this point:

I have an early'ish meeting today after which I'll be travelling north to ride the Akuna Bay loop with my sister in law. 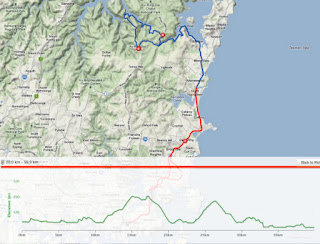 The blue line shows the approximate course. Normally I'd ride over there, but as this is her first serious hill climbing expedition we'll keep it to a fun 40k's and concentrate on technique. I had to learn a lot about hill climbing by trial and error in the Alps around Geneva. For those looking to avoid my own early attempts try this video from Cannondale man Mike Cotty: