The Cyprus situation as I said yesterday is not good for bank customers in the EU as it sets a dreadful precedent and proves that the expansion of Europe went too far too fast. 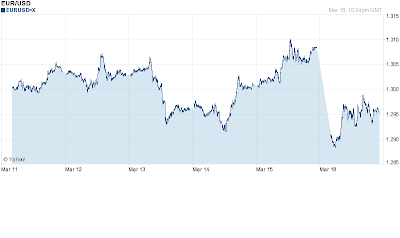 It would now seem likely that we could test the 1.27 area again in the Euro. This is quite a big shock to the system and I was surprised to learn that deposit holders were being tapped for cash while certain small group of bond holders were going to get their cash back. This is nuts as it overturns capital structure hierarchy, it's as though a department store goes bust and the customers are asked to contribute in order to bail out the store. I am extremely surprised that the population of Cyprus hasn't lost confidence in their leaders and started a Greek-style period of civil unrest. If they lose confidence that the system is working for them there will be a run on the banks.

The bond market is based on confidence; the confidence that at maturity one will be able to get one's capital back. This week the Fed meets and the minutes will mate fascinating reading because last time Bernanke was forced to go out and downplay the minuted concerns about exiting QE and play up the need to do more. He can only do this so often. If he overplays the hand he'll start to lose the market and with it the ability to borrow against the massive US deficit. Let's not forget that right now the Fed is spending $85bn a month buying various asset backed securities in order to pump money in at the long end of the yield curve. These minutes are very important and investors will need to watch the balance on the board of the FOMC.

Copper's weakness in the last couple of weeks has taken me by surprise. Ever since the Chinese leadership started talking down the housing market the metal has been on the slide.

As of yesterday there had been 23 straight sessions where copper stocks at the LME had reported an increase. Without Chinese buying or renewed confidence in economic growth copper looks likely to find it hard to rally. I suggest that investors watch the LME stocks at the Chinese copper markets for any sign of a flip in sentiment. News of yet another sharp rise in daily LME copper stocks of 18,100 tons continues a pattern of recent builds, as it was the 23rd straight session with a build in LME copper stocks.

Did you notice on Sunday how a lot of riders at the Milano - San Remo were wearing a particular non-branded jersey to ride in. I noticed it when I looked at the pictures of Mark Cavandish at the starting line. 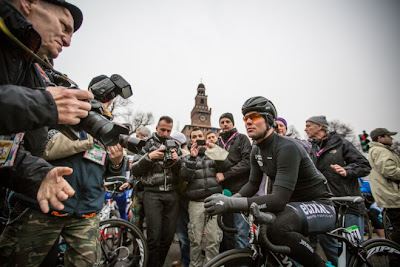 It's a Gabba jersey by Castelli and they are not the clothing sponsors of the Omega Pharma Quickstep. A lot of teams had the same idea and wore the water resistant aero shirt at the start in Milan.

This is not the only time during the season you'll notice teams using unbranded or re-branded items of kit at races. Most famously the pros turn to Ambrosio wheels during the northern classics period where strength not weight is required. I think last year Sky used them at Paris Roubaix, but they weren't the only ones. Look also at the bottle cages . . . out goes the high tech carbon, in comes the aluminium and steel. Riders clearly are not stupid and if they don't believe something will work then they dump it and move on even if that means mechanics have to spend long nights removing decals and branding marks in the process. You see it's all about confidence.

I lost confidence in my headset yesterday, I couldn't shake the feeling that the last shop to touch it had overtightened the damn thing. Headsets are not my area of expertise, but I know that if I have a choise as to what piece of equipment I'd least like to fail it would be the headset. I just had visions of the bearings somehow braking and the fork failing while coming down a hill at 50kph. I took the whole thing apart and very carefully started to rebuild it.

Threadless headsets are a fine balance between various pieces working in unison. The key is to understand the function of each piece. For example the bearings are not double sided and when they're covered in grease it's hard to tell which way they should go in.  Then there's the expansion bolt and top cap. You have to have these tightened and aligned correctly with the bolts on your stem because together they work as a unit to pull up the fork and lock it tightly in place so as it doesn't shift around and break. Watch the video and you'll understand why you need to do this a lot and have someone show you how it works so as to avoid catastrophic failure.