The US Federal Reserve via the FOMC said they'd keep pumping the money into the system last night, but as I've been saying made a slight change to its language putting greater weight on the costs and risks. There was one dissenting vote only, but it's clear that the discussions are getting more robust. Watch this space because I think they start to withdraw QE by December.

The Cyprus situation now lurches towards the weekend and time to breathe. I heard a senior opposition figure predict the banks will be open again on Tuesday. It's hard to believe that people will do anything but try and take their money out next week. I thought it was the ultimate humiliation for the EU that Russian prime minister Dmitry Medvedev said that their handling of the Cyprus debt crisis was something straight out of the Soviet Union. Take that then! I think the Russians may be willing to lend money on the basis of some kind of equity participation in the Cyprian oil and gas reserves that have yet to be tapped. Maybe some form of exchangeable bond would seem reasonable, or at the very least a bond backed directly by revenues coming from either privatisation or exploitation thereof. Look for announcements before the banks "reopen" next week.

Funny business story of the day comes via Lululemon Athletica. I've seen these shops around the place and I had to laugh when they announced that its latest batch of signature black yoga pants – available on March 1 – is, too “sheer.” They also had to remove 17% of similar articles from the stores. Now as a man of advancing years yet to enjoy the delights of mixed yoga classes I can only regret the company's decision. Of course as an investor this is a huge problem because they apparently didn't have the quality controls in for this or a previous problem with running dyes. It makes me appreciate the creators of Zara even more, they have an emphasis on stock and quality management which although some people complain about individual items they rarely stop shopping their as the clothes deliver what is promised and the shops remain fresh with new items. Beware over-promising and under-delivering. Lululemon Athletica trade at 299 times earnings on the back of a 37% expected jump in revenue this year. That sounds to me like the shares have little by way of buffer built in for such "snafu's" and probably should be lightened or sold completely into any bounce.

As the Volta de Catalunya enters the mountains I thought readers might appreciate what it takes to survive with the peloton in the mountains. 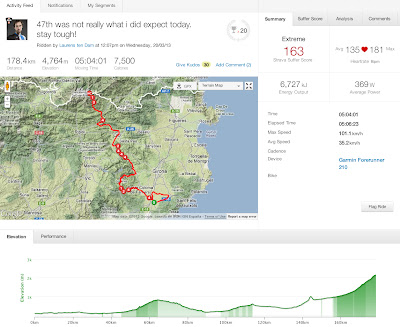 Laurens ten Dam rides for the Blanco team and is fairly consistent in uploading rides to Strava. He finished 47th in stage 3. I haven't seen the highlights yet but will endeavour to catch up with them later today. Enjoy the stats.