I was in central Sydney this morning meeting a few people involved with a cycling trip I'm planning in a couple of weeks time. While sipping my expertly made coffee (really puts Geneva to shame) I started to consider the retail environment around me. Sydney was never a great shopping city, most of my mothers generation if able managed to con their partners into a couple of days in Melbourne where the variety was far better. Its' changed around a lot with the central precinct now boasting the usual high-end names backed up by Westfield's massive redevelopment of the formerly down market strip of arcades and cheap fashion outlets on the Pitt Street Mall. The Lowy family who control Westfield's various operations have come a long way from the days of Frank Lowy selling small goods from a shop in South West Sydney's original mega-mall Roselands. I went there when I was a kid with my grandmother and it was special for the times as it made shopping easier and more comfortable. I think the most important thing Frank Lowy learned was that cleanliness equals confidence and that's why most of his operations are full of the ubiquitous "mall cops", janitors and clean bathrooms. Give a mother a place to park safely and a clean toilet and I'll show you a loyal customer. McDonalds did the same thing in fast food and it works.

Why do I mention all this today? Well Aussie retail sales figures for January came out this morning and show sharp rise, up 0.9% which was better than expected. I'm guessing the rate cuts before Xmas had a very positive effect on consumers, but January is a sales month and there was clearly some pent-up demand. On top of that the RBA left rates unchanged stating:

"In Australia, most indicators available for this meeting suggest that growth was close to trend over 2012, led by very large increases in capital spending in the resources sector, while some other sectors experienced weaker conditions. Looking ahead, the peak in resource investment is approaching. As it does, there will be more scope for some other areas of demand to strengthen."

So all good in the land down under?

If the retail environment is getting better and the RBA sees no need for another stimulus via monetary policy why is the Lowy family opting to sell out of one of the Westfield property trusts at a 10 per cent discount to net tangible asset (NTA) value? Apparently another of the Westfield property trusts will sell down its Australian and New Zealand property portfolio. Clearly the Lowy's don't believe their own NTA's and therefore neither should we. I think the Australian economy remains caught between the perils of a high dollar which is killing off manufacturing jobs and concentrating low skilled labour into a housing sector already too big for the size of the economy (remember Spain) versus a still somewhat booming resource sector all to reliant on Beijing's policies.

Yesterday of course Beijing decided to start putting an end to some of the free-wheeling speculation in their own property markets. A lot of the measures are actually just centred on the enforcement of capital gains taxes that are already on the statutory books. It was enough to have he Chinese market hit hard. On top of that I've been hearing a renewed round of forecasts saying Iron Ore is heading below $100 again. 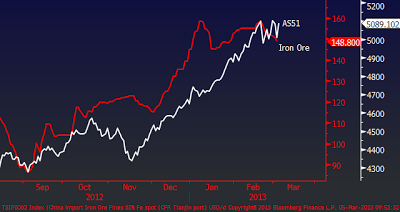 That makes sense if you think China simulateously is able to stop property market expansion and deliver a GDP growth number of 7.5% as the government has now announced. Something has to give. Is that something Australia?

Elsewhere I was intrigued that Warren Buffett has weighed-in on the debate over the amount of cash Apple is holding on.

Buffett asserts that Apple needs to think about what to do with its 137bn and he clearly favours a stock buy back. He's right if Tim Cook believes he has a new revenue driver, but if not he may need to retain cash. Remember also that the hurdle for buying back stock is very low for CEO's at the moment. The cash risk free rate as provided by the Fed is less than 1% so a CEO who says "here's a bigger dividend" to his shareholders must not have much confidence in his or her business. That's probably a little too simple, but the fact is that this is what is happening. This is why equities are so risky right now and as an example have been a dog investment in Japan for 20 years. So next time you see a company who normally doesn't pay a dividend actually pay a dividend start asking some questions about your continued involvement in the stock.

I haven't ridden today as I managed to get to the gym for the first time in quite a while. No news on my Cannondale and I remain somewhat nervous regarding its' recovery. I would say that the Pinarello was fun yesterday and the sun is once again shinning in Sydney so I hope to have it out again tomorrow. The race to sun, Paris - Nice has started and I have to say the TV coverage is pretty good here via local public broadcaster SBS. I'm not a big fan of the race and will reserve my nights on the couch for the Tirreno - Adriatico which starts on Thursday. This one looks stacked and includes Foome (Sky), Contador (Saxo), Peter Sagan (Cannondale), Samuel Sanchez (Eskaltel Euskadi), Joaquim Rodriguez (Katusha), Mark Cavendish (OmegaPharma-Quickstep), Vincenzo Nibali (Astana), Andre Greipel (Lotto-Belisol) and the young Tour Down Under winner Tom Jelte Slagter (Blanco). On  top of that the scenery will be "fantasico"!