It's been a while since I personally had to bring out the winter clothing for cycling, but on Sunday morning in Orange NSW I was wishing I had my Assos winter jacket and neoprene cycling gloves. 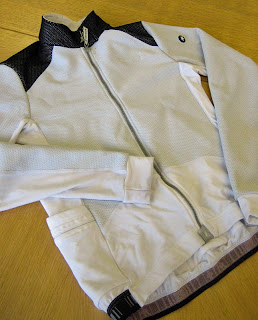 I made the classic error of mistaking sun for warmth and spent a couple of hours with numb fingers and cold arms. The worst part of it was that I had sufficient gear with me back in the hotel room and therefore only had myself to blame on the first decent of the morning near The Pinnacle about 12k's out of town. 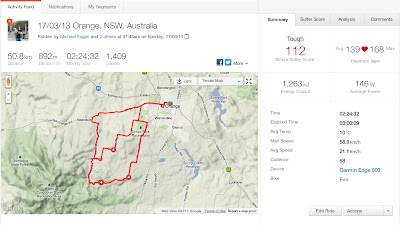 Weather at the top of the main climb was clear, cloudy and about 8ºC. It was a good ride, but boy was I happy to get back into town where the temperature was closer to 12 and we were riding in the sun. In Sydney it's very easy to forget how cold effects you on a long decent as the temperature variation from 200m's to sea level at 50kph never really bothers you.

On Saturday we had ridden about 100k's. As usual I did my classic trick of forgetting to restart my Garmin after the coffee stop about 70k's into the ride, so I missed about 6k's of tracking. 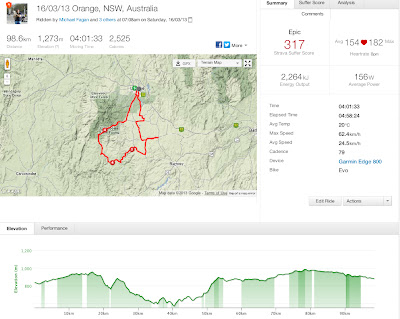 Really great countryside, a couple of good challenging climbs and a wicked 12º decent through the Australian bush. The Cannondale was purring most of the way, though I have managed to convince myself that the shop over-tightened the headset. No problems with my Fulcrum racing Zeroes though and I was glad that I hadn't chosen the Cosmic Carbones as there was some cross wind on both days of riding. I was very happy that even though I wasn't the strongest rider in the group by a long way, thankfully the ceramic bearings in the Fulcrum's had me making up time that rightfully I didn't deserve. A great weekend of riding, wine tasting and dining; the equal of anything I could have had in Europe without the famous name climbs of course.

In terms of cold weather riding my own complaints need to be put into perspective by what happened at the Milano - San Remo. 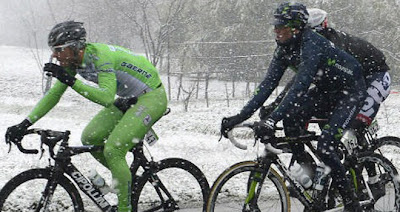 I've driven the valley road from Milan to the south many times in all seasons, but I never had to face the snow perched on the back of a carbon racing bike at 50kph in the snow while wearing lycra. The race was actually stopped around the half way mark due to treacherous conditions in one of the tunnels. Riders were put on team buses and moved south to about a 130k's from San Remo. 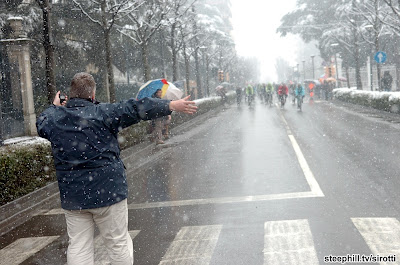 The peloton was separated according to their arrivals times at the race break point. At that stage it became a 130km sprint that was clearly going to favour sprinters who now had the benefit of avoiding some of the climbs that had caused Cavendish to basically drop out in 2012. I won't call it an all time classic but it was interesting to watch.


It was cold for cyclists on the weekend and cold for bank depositors as well. Cyprus and cold weather rarely get mentioned in the same sentence, but I'm going to do it here. The Cypriot banks remain deeply underwater and in need of a fresh cash injection. The good news is that for a banker such as Mario Draghi and his unlimited printing press his €10bn share of the bailout the Cypriot President is trying to get through parliament should be no problem. Of course it did make the markets a bit nervous because some people can see the potential for the bigger problems elsewhere in Ireland and Portugal resurface looking for their own renegotiated bailouts.

The Cypriot bailout plan was going to establish a levy on all deposit holders as a part payment solution to the problem and in return be offered bank shares covering the full amount of their losses, while those who left their savings in banks for another two years would be rewarded with bonds backed by future income from exploiting Cyprus’s natural gas deposits. This was reshaped over the weekend with a 6.75% levy would being imposed on all deposits under €100,000 while accounts over that would be hit with a 9.9% levy. The German-led group of creditor countries demanded this levy as part of last years agreement intended to bring down the bailout’s price tag to European taxpayer from €17bn to under €10bn. It's clearly all a mess, though I like the idea of owning the bonds linked to energy reserves so long as they carry some kind of coupon at an appropriate spread above the benchmark euro rate (which to Draghi means the German 10yr bond).

Of course getting bonds and shares in exchange for a levy may be better than nothing, but given the warnings why didn't people withdraw their savings and move them to offshore banks? Were people just tired of the whole thing? Surely other European depositors will now be rethinking the depositor guarantees that they believe they were given at the eight of the financial problems in 2008. Those guarantees were meant to clam depositors and stall a run on banks. If you were in a country looking for another bailout wouldn't you be opening an account with a foreign bank?

Japan's efforts to talk up inflation have convinced investors they need to be onboard with the inflation led plans of PM Abe. The market shows some interesting characteristics now with four of the nine companies and Reits to be IPO'd in Tokyo this year at least tripling on their first day of trading. That's some very interesting valuation work by various corporate finance groups. Part of the reason will have to do with the fairly limited percentage of shares that get offered in Japanese IPO's as companies look to remain in control of their operations while benefitting from a market starved of new ideas. The other part of the reason is a combination of fear of missing out and irrational exuberance. Japan is looking dangerous again and even in a society that tends to trust first and ask questions later this is looking like a turning point to me unless we see some real signs the economy is growing. Investors need to remember that a quarter of a years profit growth based purely on an FX move does not mean the battle, or for that matter the war is over.