I do not begrudge Hector Sants the UK's chief regulator at the FSA the GBP3m package he is getting from Barclays to move over there to head up compliance. I would say though what sort of contract does the FSA and therefore the UK government have with him that allows him to take such a significant  role with barely a dash of gardening leave? Surely Mr Sants should have to sit out for a number of years before becoming a head of compliance at any institution he helped regulate over his time at the FSA. It's not his fault, it's governments fault.

Speaking of grudges I wonder if the EU will hold a grudge against S&P et al now that they've upgraded Greek debt? The Greek government swapped holdings of its own debt for notes issued by one of the eurozone’s rescue facilities at a value of 34 cents on the euro, it subsequently traded as low as 17 cents when a second restructuring looked likely. Luckily for the Greeks Mario Draghi committed to printing as much cash as he could get away with and not be sent to gaol by the Germans and therefore rescued Greece. None of this of course means the misery that is Greece, or for that matter Spain will not continue. I remain confident the main beneficiary of all this largesse will be German inflation and as I've said before the German real estate market is worth looking at. Maybe some of the French 1% now being asked for a top rate of 75% tax on their income might like to move there?

It's always been easy to take shots at the French. The anglo-saxon world has always been confused by the French psyche, especially when it comes to work/life considerations. Have you noticed that UK Gilts and French Government Bonds yields are starting to converge. The French now pay just 9bps over the Brits for cash. Consider this; the French deficit is smaller than the UK and they should get to 3% of GDP next year. They have about the same government debt and less private debt than the UK. The UK meanwhile is thinking about switching their monetary policy from targeting inflation to targeting GDP. That means inflation is coming to Britain and therefore I think UK real estate is likely to provide a hedge in the same vein as I mentioned in respect of the Germans. As far as France it may be best to stick with the yield trade at the moment and watch the FGB-Bund spread as well.

The FT's Alphaville column did a bit of cutting and pasting of DB's outlier events for 2013. They make some good reading because no matter how whacky you can just believe one or two might happen, well at least enough to continue buying those way out of the money puts that will pay-out like the lottery in a crash:

Worth a look don't you think?

For the second day in a row I've been off my bikes as my bad back hasn't improved much. It's a bit disconcerting as I usually get over things like this much more quickly. Given this I spent some time putting up a new ceiling hoist in my garage to get one of the bikes off the floor. I think considering my physical problems I did a pretty good job: 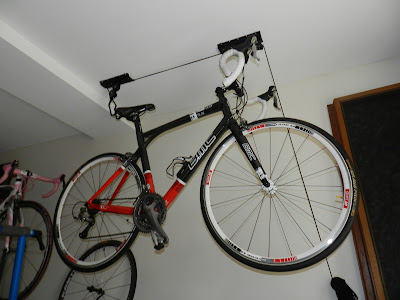 I've also decided to sell the BMC as I really don't get a chance to ride it much anymore. It's been  a great bike and really got me into the sport. The Shimano 105 triple is an ideal groupset for those looking to avoid some ealy pain associated with getting bike fit. If you're interested just drop me a line.