In the last two days which of the following headlines actually surprised you the most:


I think the BH news was the most unpredictable in substance, yet predictable in terms of the way the oracle of Omaha works his magic.  Look I may have misread this in some way because the insurance industry to me is somewhat of a black box. A friend of mine was an actuary at various Lloyds syndicates when he first left university. He said at the time that the risk models that he and the other quants built were treated with a lot of scepticism by the "old boys" of the market. I wonder who at BH decided what the hurdle rate was going to be for this particular investment. Mr Buffett seldom talks of the mistakes he's made in the insurance arm of BH. It's so strange and in a lot of ways I really don't care who was right and who was wrong, it just speaks volumes to the dangers of selling puts . . . the leverage effect always works against you when you least expect it.

Selling puts on known parameters is fine by me. If you understand the risks and you're happy to own the the asset, i.e. take physical delivery, then so be it. And that's the key, for the private individual you don't want to have the cash settlement type put because you lack the ability to play the bounce automatically. Deutsche Bank looks prima facie to have effectively taken delivery a lot of European debt exposure and have happily been waiting on the bail-out to work it's balance sheet magic for them. The unfortunate thing here is that DB is a public company and it has a duty to the market and the regulators to provide full and frank disclosure. Having key risk officers reporting the bank in this way should have never happened because it never should have got that far. It's ugly for everyone, not just DB. A lot of the assets referred to are probably held by other major institutions and as such we now have some serious systemic problems to deal with. This could get ugly for a lot of auditors and lawyers as well as bankers and it remains to be seen whether the regulators were in any way complicit in the valuations in question. Wasn't it only Monday that the BoE was warning that assets being carried by the major UK banks looked to be incorrectly marked?

Citigroup announced reductions in the bank’s emerging markets consumer business, global retail operations, investment bank and support functions. The thing that gets me here is the cuts in the emerging markets division. I'm sure I saw where this was to be a major focus in the bank's future. Clearly new CEO Michael Corbat has other ideas. It's going to be a long cold winter in the banking world.

I guess if you want to avoid the misadventures of banking you could always just sit in Apple shares and rake in the benefits from all those i-Things they sell. 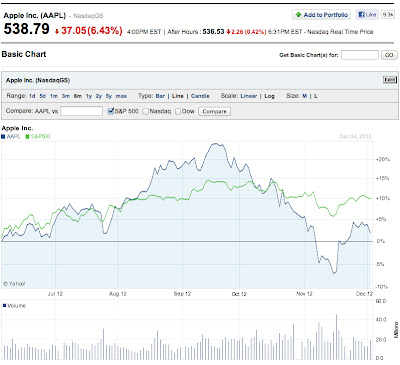 Well if it was a good idea yesterday then today you'll be even happier because the shares are worth 6.5% less. I've warned before about the crowded nature of the AAPL trade in hedge fund land. I have said all along that a company with this much free cash flow is not worth shorting and I stick by that. If you paid $700 per share when iPhone5 was launched you're now underwater and wondering what went wrong. It's a simple story of growth rates really. Fundamentally the company is sound, but people forget PER is about how much you're willing to pay today to own the stock at a given time in the future. Sitting on cash is fine if you can make a return on it commensurate with the risks in your business. Lots of commentators today said there was no news to cause the fall in Apple. I king of disagree . . . firstly there was the window dressing that went on for the end of November and it's correlation with year end books close for some investment banks. I also not that Netflix's new streaming deal with Disney looks like something Steve Jobs would have never allowed to get this far. Jobs remember held much of his fortune in Disney and through board memberships etc. worked to leverage that in Apple's favour. I don't know whether Netflix will be in business before this deal starts, but it shows that the Apple Fortress has some weak points in content.

I didn't ride yesterday as my legs were absolutely shot from the mega effort that took me to the northside of Sydney. I'm going to get out a but later for a stretch ride up to Centennial Park just to get the blood flowing again. What I did manage to do yesterday was a quick check on the Cannondale and I discovered some significant gouges in the rear tyre. I normally don't get too worried about this type of thing, but you could see the white casing underneath the rubber so I decided it was best to change it. No problems with the tube so that remained in place. I like the feel of Mavic's rubber, but am starting to think they may be a little too soft for Australian conditions. I know the hard shoulders here aren't so hard and you seem to spend a lot of time riding over tiny sharp pieces of gravel. I f I get more nicks and gouges I think I'll change to some Conti GP4000's as they are pretty much bullet proof. I have these on the Pinarello both in tubular and clincher form (Campy Bora and Easton wheel sets) and they rarely let me down.