Glorious weather here today and just the right conditions for my first serious ride on the northside of Sydney. So 81km later and I'm back home trying to digest the comments from the RBA. Before looking at the RBA's reasoning I prefer to look back on a great ride. 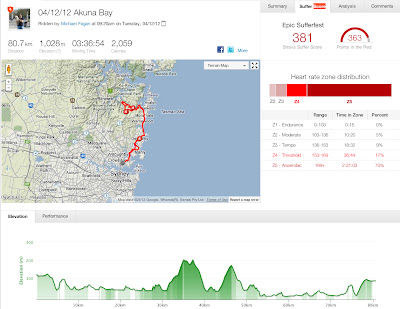 A lot of firsts for me on this one:
It's nice riding with another investment banker on sabbatical, especially someone who was gently trying to push me to a better higher level. The Cannondale was really humming until I ran out of legs on the homeward stretch from Dee Why to The Spit and up the Parriwi Road climb. Strava tells me that I'm a pathetic 1706th of 1875 recorded attempts. At least I have something to aim for in the future.

When we got back we found that the RBA had predictably cut Aussie rates by 25bps. They'll be lots of talk by commentators that this was about helping middle Australia either directly by mortgage relief or indirectly via relief for SME's who employ them. For mine this all about the RBA waking up to unsustainable level of the AUD, because it's not just about SME's it's also about the number of massive mining projects that have been put on hold because of cost concerns. Just look at Rio Tinto's recent shift to the Mongolian mega pit over several Aussie projects.

I checked the usual social media when I finally got home. Bill Gross of Pimco Tweeted out today something we all know but dare not talk about: "Stock prices are dependent on Treasury real yields. 5-year TIP yield at negative 1.5% must go even lower for stocks to rise." It's true right? As long as rates remain where they are it's hard to see a crash . . . maybe a correction . . . but nothing extreme. So what would make US rates go up? A change at the Fed is the only action that seems likely to change this and I don't believe Obama is going to do anything less than beg big Ben to hang around so he can complete what he started.

Finally looking forward to the northern spring, when the one day classics dominate I want to leave you with something that I thought was truly exceptional. This is a piece on the famous Paris - Roubaix classic that runs in spring across the northern planes of France. Enjoy:

A Throw of the Dice from RAPHA on Vimeo.