What would happen if things got better . . . riding on fluoro

No blog yesterday as my newly acquired bad back had me feeling none to happy with things. I did manage to get out on the bike in the afternoon for just long enough to loosen up. Thats the thing about cycling, the low impact nature can sometimes help you get through an injury rather than over it.

When I hit the news headlines this morning (in a better mood) the FT screamed at me: 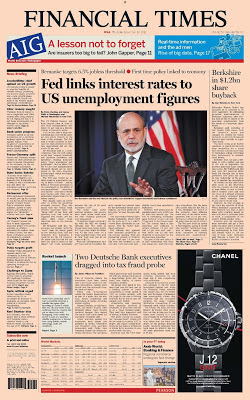 My first thought was buy everything, but my second thought was to sell bonds. Now you have to give Bernanke credit for understanding the physiological side of his position. Big Ben has been very consistent in drawing lines in the stand and backing them up with action, whereas the Europeans until recently have demonstrated their paralysis by jaw boning without backing it up. OK, so lets think about it. Unemployment officially is now under 8%. That's good, but one of the reasons why it's there is the huge expansion of the Fed's balance sheet. Right, so until yesterday we were always thinks rates go nowhere until 2015 (Bernanke's last line in the sand), but now we have the spectre that at the current trajectory we might get unemployment towards 6.5% by the end of next year. So the question now is when does the sell bonds - buy growth equities - sell dividend equities switch start to happen. This is one hell of a big unwind and the traditional 6 month forward looking mechanism of the equity market has been severely corrupted by the current monetary policies. This leaves me thinking that the smart money are going to start selling bonds sometime in Q1 and have me actually contemplating reflation trades ahead of this. One last thought . . . there's also a 2.5% inflation trigger as well in the Feds thinking. The real question is: given the rate of increase of the Feds balance sheet is inflation controllable in the event of an unwind? Is this where gold returns as a bull market?

Here's an interesting graphic from Bloomberg. This shows what happens when capital gains tax rates increase. The two biggest increases (1972 and 88) saw investors take the money and run. 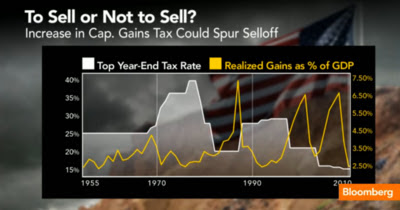 Obviously we're not in a normal market, so I'm not 100% convinced, I do take solace from the Bernanke statements yesterday that we may get back to a normal sooner rather than later and as such I think tax payers  in the US with very little good income news over the last few years take cash and pay the tax man. Consider this though. A lot of Cap gains people have are in the bond market, so does that leave us more vulnerable to volatility there?

Looking through to the switch from yield stocks to growth stocks I did the rounds yesterday trying to find out a little more about a troubled Aussie coal stock. I won't mention which one, but it seems to have several likely outcomes in the offing. Being a private investor of restricted capital means I won't be able to get in on the fun that will be the various debt pieces attached to it, but the equity could be interesting in the event of a sell-off as the company itself is interesting and the asset is worth looking at. As usual with these mining stocks there's an asset value and a developed asset value. The infrastructure required to take a small cap explorer to a mid-cap producer is often a bridge too far. Look at all the work companies have done on African assets and never taken them into production. Even in Australia capacity become a major constraint and the lead time between ground braking and first shipment can push companies over the edge. Thats why we're seeing so many projects mothballed. The big power point presentations don't always quantify the risks, thats why I like to be part of the debt syndicate. With bonds and financing you get a much better picture of whats going on. Debt is king at this stage of an assets development. Caveat emptor.

I've been looking at some of the rarer bike brands as I'm thinking about business opportunities here and with some friends in Asia. I know they've got distributors in most timezones but i was particularly struck by the De Rossa De Rosa Telaio Merak Evolution in the "verde" colour scheme: 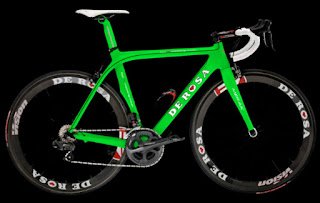 Anyone with their eyes open can see the fluoro trend in all things fashion at the moment. This is De Rosa's 2nd level bike if I'm reading things correctly. The frame comes in at just over a kilo and the setup in the photo shows it with the electronic version of Shimano's Ultegra. To me it has a kind of aero  feel to the frame. It's hard to find any real reviews, so let's go with the fact that if you ride this people will see you coming.