We're not in Kansas any longer Toto . . . and we're also not in Geneva

I took time out from dealing with telecommunications people today to hunt around for a bike to hire for a couple of days while Cannondale get things moving on my Evo Super Six. I stumbled across a beautiful shop on Clarence Street by the name of Atelier De Velo. 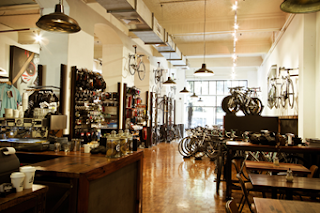 Its a combo upscale bike shop and cafe. I met Mike Shaw the owner who was working on a Wilier when I first came in. In fact I was surprised to see they had Wiliers as you just don't see them that much in Switzerland and France, let alone Australia. They also stock Bianchi and Focus. Prices looked in line with what you'd expect in Italy after allowing for the extra freight.  Mike seemed like a nice guy and he told me that they were trying to arrange a regular shop ride which obviously I'd like to join. No promises but he thinks he can help me out. So if you're in Sydney and want to grab a coffee in a very chic bike shop then stop in and and say hello to Mike. He might even let you buy a Wilier from him!

Who had worse news last night . . . Cadel Evans or Ben Bernanke. Both were under extreme pressure. 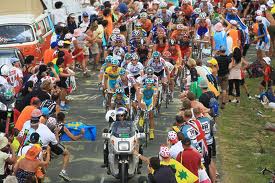 I wonder what would happen if they swapped roles? Would Evans be a Keynesian and print money until the global economy started to grow again or would he prefer to conserve his energy knowing that the right moment was still to come? Conversely would Bernanke have attacked in the Alps or held back for the Pyrenees? I think Evans would be more a monetarist of the Chicago school and chose his moments knowing that his resources were finite. He can't win the tour now, much like Ben in my view can't win now either, but both can try and preserve their reputations by a judicial use their respective energies in these final stages. And for the record . . . I'd say Ben would try and ride in every brake away hoping that he wouldn't get worn down by the peleton in a futile attempt to be the last man standing.

The reporting season in the US seems to be a bigger driver of equity markets in my view than the macro for the moment. It's almost as though we're in a news vacuum in Europe as the Libor scandal seems to offer an appropriate diversion for politicians unable to come to grips with the bigger picture. I pity the poor trader at Barclays Philippe Moryoussef whose name has now been leaked by people connected with the probe as he's about to have a summer of utter misery at the hands of the press. IN meantime the big names of the Dow and S&P500 keep beating analysts forecasts thanks to their constant talking down of expectations.  Amongst the financials even Bank of America managed to eek out a "beat" of 19c v 15c expected. Of course not everything is as black and white as advertised and much of the profits finding their way into these numbers are from write backs of provisions. There is no growth . . . that is clear.

Goldmans who also beat analysts estimates the previous day was in the same boat relying on further headcount cuts etc. to torpedo the boffins. They'll have to cut more, or more likely restructure if they're going to provide investors with an acceptable return in the medium term. Sost income ratio was back over 44% in the last quarter which in my mind suggests that the new business model is yet to be found. Heaven help the Citigroups, UBS and DB's of this world.

I hate to bring up HSBC and their performance in Washington, but all this talk of Mexican banking being data poor is a bit much. Let's face it someone dropped the ball and as usual shareholders will be taking the hit to the tune of about 1bn. KYC is not difficult, it just takes a line in the sand of which everyone is aware. The key is the line and in the case of HSBC everyone had there own version of it.

I haven't seen anything that is really sexy yet in any of the results coming across the tape. Like I said yesterday, when Telstra is at a 3 year high, then equities are in a bad way.