Apologies to all for being out of action for the last 10 days or so, but unfortunately putting together a blog while using an iPhone tethered to my laptop was just not feasible. It shouldn't have been like this, but such is the life of a returning expat.

Telstra is Australia's biggest telecommunications company and like many of the largest phone companies around the globe they are the legacy of a public utility. In other words service is an after thought. As a returning customer I guess I shouldn't have been shocked when they completely botched the installation of what here is called a bundle (landline, cable TV and internet). After finally getting the internet connected they failed to coordinate correctly with cable TV partner Foxtel and I decided to exercise the cooling off rights in the contract and move to number 2 provider Optus before things got worse. The irony of the situation was that if Telstra had just got a Foxtel guy over to drop off a box they could have kept the business and I would have installed it myself in 10 minutes as I did in Switzerland, Singapore and the UK. Instead they said it would be another 3 - 5 business days without any guarantees . . . so just to rub salt into the wounds the Optus transition team connected me directly to Foxtel who booked me in for an appointment tomorrow morning before 10am. Why Telstra couldn't do this is beyond comprehension. Too bad for them.

Leaving customer service issues aside the shares of the Telstra are trading at close to a three year high. The stock reminds me of Tokyo Electric Power in the late 90's when Japanese rates where being cut to zero. Clearly this stock is now a bond and is illustrative of many legacy utility providers who have the benefit of high barriers to entry and strong lobbying power in their respective capitals. The long only fund managers are effectively hiding from the lottery which is the broader market. 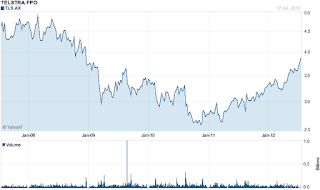 I guess Telstra is a little more interesting than most as it's growth driver have been via its holding in Foxtel, the primary cable TV provider in Australia. Their main partner in Foxtel is Newscorp and that leads me to the question of what might happen if Newscorp moved for full control . . . would Telstra sell? Should they sell? I haven't done the numbers but if Murdoch were to cede control of his newspapers, as is possible under the proposed structure for Newscorp one would suspect he would make a move to do a deal with Telstra. Of course the wild card is local media company Seven who have a strategic stake in CMH the third partner (25%) in the Foxtel ownership structure. I wonder also that in the case of a sale would the government look to brake up the effective monopoly of cable by encouraging a foreign investor via the much vaunted National Broadband Network?

China is truly a magic place. Just when you though lower factory orders and a GDP on the skids was going to bring the whole edifice crashing down out pops, a mere two months after loosening monetary policy a rise in property prices. Essentially everyone rushed down to their local condo developer etc and bought what they could:

"Of the 70 leading cities tracked by the Chinese statistics bureau, 25 registered month-on-month price increases and 24 saw prices remain the same, while prices fell in 21. That was an abrupt reversal from May when prices fell in 43, stayed level in 21 and rose in only 6." (FT)

It's important here in Australia as housing is by far the primary consumer of steel/iron ore. If Chinese housing fails then so to will the AUD. The FT has the following graphic explaining the relationship: 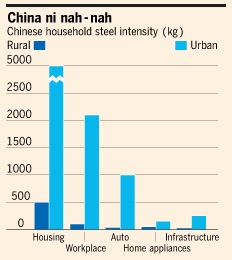 The question for the government is whether they can stimulate without adding inflationary fuel to a housing bubble already mature and looking to burst. Personally I doubt it, but we have to await the tricke down effect to other sectors of the economy before conducting the last rites for Beijing "Condo-man" and his relatives.


The TdF in my view has lacked something. I think Sky has just been too good. About the most exciting thing this week was the tacks thrown on the road during stage 14. I have no idea why someone would do this, but I thought Wiggins showed class in slowing the peleton for those who had suffered.


I haven't had to worry too much about tacks, nails or spectators as none of my bikes have made it to Sydney thus far. I was hoping that my Cannondale would have at least left Europe by now, but alas Cannondale have failed to come to the party. I'm hoping it's just because they needed every Evo Super Six frame for the Liquigas team. Nibali sits in contact with the Sky team as Sagan's flexes his muscles in his quest for the sprinters green jersey. It's been pretty awesome watching Wiggins and Froome dispense with all challengers in the GC up until now and I doubt that they can been beaten by Evans or Nibali.


Sagan is a beast and so exciting to watch as Liquigas doesn't have any kind of lead-out train and the "Tourminator" is left like a limpid mine to attach himself to the Lotto team and sneak in when Griepel is not watching. Fantastic stuff.

Thanks for reading today and I promise to warm things up now that I'm back on line.