Revenues and bicycles . . . can I have both please?

There was a nice interview with Dr Neil Soss of CS on Bloomberg late yesterday New York time. He rightly talked about a European Resolution Trust, similar to what happened in the US after the S&L crisis of the late 80's. 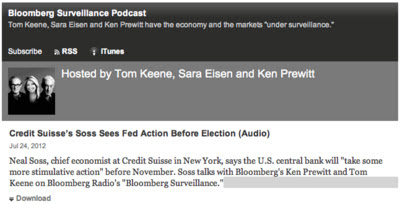 Dr Soss describes something I wrote about this week and that is this lack of trust between credit "buyers" and "sellers". It clearly is about a blocked credit pipeline and as I said you can make rates as negative as you like, it won't change the fact that no one is lending because they just don't know what collateral is worth. It's worth listening to.

Apple finally looks to have entered a dangerous phase it its precipitous rise of recent years. I wrote about my skepticism some time back, but I was reluctant to fight the tide. Now comes today's result which shows a weakness at the revenue line. The headlines read: 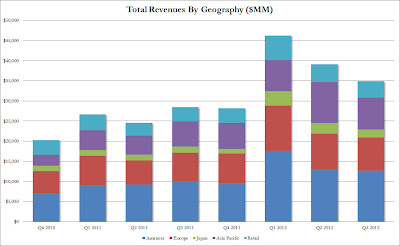 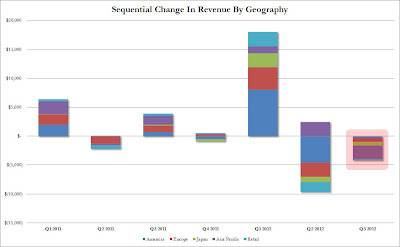 Each show the declining revenues over the last couple of quarters. The upper chart shows the raw numbers by geography, while the lower shows the sequential change. Now the bulls will say that there should be allowance for the seasonality / new product effect, such as a new iPhone. Let's just say that 1Q12 was not the time when the stars aligned and everyone went out and bought an Apple product, let's instead say that this was a one-off iPhone 4GS / iPad etc. product cycle "thing" . . . is it reasonable to suggest that eventually we'll reach saturation? Is it also reasonable to say that at some stage a credit crisis will slowdown the consumers ability to by products from Apple and pay a 42.8% margin v. whatever single digit number Samsung is happy with? You have been warned . . . one failed product and we'll be in Microsoft territory where it becomes all about Apples cash pile (110bn) and no longer about the earnings growth. Prepare to short.

I got mail overnight about the delay with my Cannondale Evo SuperSix order which got me thinking. In the mail the agent said that the normal lead time within Europe for new or replacement Cannondale bikes was about 15 days for top end products. To me that's about right for a carbon framed bike that embodies a certain amount of hand finishing. Now the problem is that the old 15 day rule seems to have become a little elastic at the moment so I thought I'd look into this.

Dorel Industries is a Canadian company that owns Cannondale. They call themselves a "World Class Juvenile Products And Bicycle Company, meaning they make baby carriages and own Cannondale . . . well that's a little harsh, but essentially that's it. First of all here's the geographical exposure of the company:

When we dig down they are moving into South America via an acquisition in Chile and Emerging Europe via Poland.  The problem comes when you realise the problems in the company are  in the Juvenile (baby carriages) segment and the growth is all in the Recreational (cycling) segment.

Juvenile segment revenue in the first quarter of 2012 was $269.5 million, flat with 2011. Operating profit for the period was $20.7 million, a decrease of 12.7% from $23.7 million in 2011. Organic revenue decreased by approximately 4% after removing the Dorel Chile and Dorel Polska acquisitions and the impact of varying exchange rates year-over-year.


The company has been restructioning the Juvenile divisions and we'll need to see how 2Q12 looks before deciding on that. I'd be happy to see their margins on an up trend in Juvenile to prove the point, because I know that revenue is unlikely to have increased. If the demand in the Recreational division holds up we may be able to revisit the stock as at the moment the stock is trading on somewhere between 8-10 x earnings . . . not stretched if they get it right. 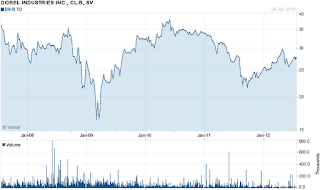 I'll report back when I get those quarterly results and 'll; try and compare them to other companies in the sector.