A rainy morning for my first serious ride in Sydney since getting home. I took it easy as the roads were slippery and the new tires that Mike Shaw from Atelier De Velo had put on my loaner Bianchi Oltre were in need of a certain bedding down. So this weekend edition of the blog will be part observation and part review of this first ride.

You only really know the quality of the tarmac when you get on a bike. In Sydney's case I never thought the roads were really that bad, but they are and for the bike rider there are plenty of cracks, potholes, dips and debris to watch out for.

The second observation is that Sydney is a morning city. This isn't Geneva where the only people you see before 10am on a Sunday are the police or other bike riders. In Sydney there are walkers, joggers, dogs, cars, garbage trucks and the occasional cyclist all launching themselves into the day. Everyone moves with purpose, even if that purpose is only to obtain their favorite cappuccino, latte or most likely the ubiquitous Aussie "flat white".  For the cyclist this means that you have to keep your head up at all times, thus making it a little stressful especially when you venture on to the more popular thoroughfares.

As you can see from my Strava output my route today involved the foreshore in the most densely populated piece of Australia; Sydney's Eastern Suburbs. I chose this course as I was born and bred in the east and am familiar with the most scenic locations. The main challenges of the day were the hills towards the suburb of Vaucluse and the exit from Watson's Bay to The Gap and on to Bondi. Most of the hills are short but steep and The Gap run has a nasty 11 degree section that wakes you up.

Generally car drivers are a bit dismissive of cyclists. I'll reserve final judgment as it was 50/50 this morning and to be cyclist friendly you need a more 75/25 attitude. A couple drivers got a little impatient around the many traffic calming devices that litter the streets of most modern cities. The real test and in many ways the best test is the round-a-bout where drivers often look on cyclists as not their equals and fail to give way (in the case of Australia) to the right. Taxi drivers are particularly dismissive and I guess this morning that my most uncomfortable moments came from taxi drivers getting a bit close. 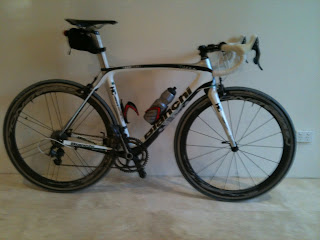 Thanks to Mike the Bianchi Oltre was setup as well as can be expected. He did a great job getting me in a comfortable position. The man took a lot of time to fit me and gave me a great excuse to recomend him to all readers of this blog. I'm not sure of the size of this white, grey, black and celeste example but frame is as advertised, very handsome and beautifully finished. I like the predominance of white as most of my own bikes up until now are more black orientated. The bike was finished in Campagnolo with Chorus groupset and new Bullet wheels. 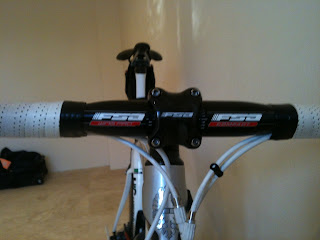 The  frame had an assured stiffness and maintained its stability under heavy use, especially up hills. There were none of the creaks and moans that my BMC has under power moves. I felt the top tube was perhaps a little short for me and it might just be a fitting thing that you would correct on purchasing a custom fitted model. The Oltre has a very comfortable ride, which was greatly appreciated on these roads. This is no Felt FR1 and should suit even a heavier rider looking to put in a big weekend on the road.

The Campy Chorus groupset was my first experience of the lower spec version of my usual Super Record 11. I have to say it's far superior to the Shimano 105 (though I think it's better compared to the Shimano Ultegra) on my BMC and has a more precise feel for shifting. You can hear the difference between the Super Record and Chorus as the latter's alloy based components make a different sound than the carbon dominated former. It really doesn't matter a lot and I found myself quite satisfied with everything to the degree that I forgot about the groupset altogether. Surely that's a good sign? 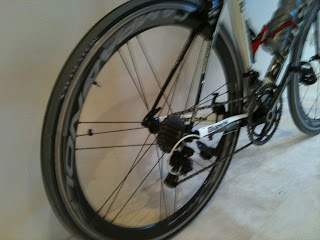 I had only read about Campagnolo's new Bullet wheels in the cycling press and aside from being non-plused by the aesthetics really didn't have any preconceptions when I first sprinted up Darling Point Road. The rear wheel has the familiar G3 spoke pattern. I'm not sure which spec these Bullet 50's are, but they're likely to have the standard steel ball bearings from what I'm feeling and probably weigh-in at around 1700g's. They are carbon bodied clinchers with Aluminum braking surfaces which was needed greatly this morning. First impressions were that they were comfortable, but lacked the "zip" of say Campy Bora's. Having said that they feel alot more solid than my Easton EA90 SLX's. I guess they're cheaper than the Bora's, but possibly more expensive than the Eastons. I need to check this. One warning though for riders new to Sydney . . . the wind can really blow here and I'd suggest a good set of standard depth rims for days like today.

For a rider of my capabilities I was never going to find much wrong with this beautiful bike. It should easily bring a smile to most intermediate to advanced riders faces before, during and after a good hit out. Comparing it to my Pinarello Dogma 60.1 I'd have to say its a close call and dare I say it may even come down to aesthetics and fit out. This one can be yours for around AUD 9000 before negotiations, which puts it very much in the top end group. I'm going to be riding the bike for the next 2 weeks and promise to report back on my progress.  I fitted the Oltre with my trusty Garmin 800 and when I get the cadence sensor registering properly will no doubt be more able to maintain a pace better suited to the capabilities of this fine machine.

Many thanks to Bianchi and Mike Shaw from Atelier De Velo for the opportunity to ride the Oltre.