I don't believe that the gloomy comments by John Williams, president of the Federal Reserve Bank of San Francisco caused the sell off on Wall Street on Friday. I think three solid up days closing in on a weekend meant that shorts have likely finished their covering moves ahead of the poor but better than f/c quarterly results in the US. The bond market continues to show the real stresses in the economy and therefore I remain skeptical as to the likelihood of a bonds sell off in the US and Germany which in my mind would go hand in hand with any push towards equity analysts f/c of the S&P500 above 1400 (e.g. BoA 1422 target). PIIGS bonds remain under pressure, as does the Euro itself. In fact it is interesting to note that the correlation between equity risk and the Euro has looked to have broken for the moment and thus much of the algorithmic trading world is now in a kind of no mans land or perhaps even purgatory.

One reason for Mr Williams concerns can be seen in the following chart in the FT sourced from the Fed itself: 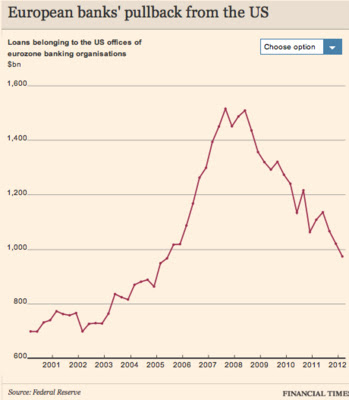 This neatly sums up the reasons why what we're experiencing is a credit crises and not a conventional recession. I would hazard a guess that this is similar to Japan post the bursting of the bubble back in the early 90's. What we learned from 20 years of Japanese misery is that loose monetary conditions alone do not in fact lead to a recovery in credit markets. In fact this type of policy leads to continual distrust within a credit system as in order to efficiently disperse available capital to enterprises likely to use it wisely requires a certain faith in the system. By pushing down rates to (in the case of Japan) zero or lower actually sends the wrong signal especially if depositors (the public or cash rich corporates) see no quick change in the uptake of this cheap capital. In fact the message becomes one of - "wow, if rates are negative how come the smart people in the economy don't use it? In that case I'm/we're worried and therefore don't trust the system ourselves." The Fed now is effectively pushing on a string, just as the Bank of Japan has for many years. Credit is not getting through to SME's and therefore those free enterprise economies are unable to stimulate enough growth to increase employment. I hate to say it, but perhaps the governments should tighten monetary policy while simultaneously loosening credit conditions by either nationalisation of the banking system or the creation of new credit dispersing bodies (e.g. Fannie Mae and Freddy Mac) with clean balance sheets able to lend at reasonable terms without the anchor of bad loans and mental destruction from the 2007/8 crisis.

The earnings season as I said earlier has been a positive for the stock market, but Apple reports today and given it's status as bellwether and safe haven it will be crucial in deciding the next technical move in markets. Apple’s earnings for the quarter are seen at $10.38 a share, based on Thomson Reuters I/B/E/S. That compares with a profit of $7.79 a share for the year-ago quarter. Apple’s shares are up 49.2% for the year so far. I doubt they'll announce any further enhancements to their balance sheet via dividends or buybacks, but be aware there is potential for both.

Over the weekend the FT did a short piece on the economic cost of Cycling UK's quest for Tdf yellow and Olympic gold. I thought the piece had a strange tone, but maybe that is befitting of such a newspaper. I don't know what the eventual costs of the Olympics or all the money poured into British sport in the lead up will be, but I do know that it probably has saved the country from a deeper and more morose recession than might have been. No one one can detract from a sensational effort by Wiggins and Sky. Cavendish's win in the final sprint was wonderful and in my mind a foregone conclusion at the start of the day. Whether Wiggins can repeat remains in the lap of the gods who settle the final course for 2013 and of course the mental attitude of his team mates. Froome, his guardian angel in the mountains only once looked likely to crack as Greg LeMond did in the face of Bernard Hinaults broken promises during the 1986 TdF. You have to assume that Froome is unlikely to get any promises from Wiggins given the current champion's relatively young age (31). Instead I'd look to Sky to slowly break apart with Froome looking to back himself at another team.