So one thing athletes and central bankers have in common at the moment is super high expectations. Some will rise to the occasion and some will not. Although this blog is about investment banking and cycling I believe that during the Olympics no metaphor combining the competitive world and the financial world should be left un-abused. In this spirit I ask you to compare the expectations of (say) Mr Ben Bernanke and the Australian Mens 100m freestyle relay team.

My Aussie brothers were under extreme pressure many weeks ago and their team leader, James Magnussen had even acquired the nickname of "The Missile". Now the irony here is that Mark Cavendish, who suffered under the weight of expectations also goes by the same nickname. So what happened? The team came in fourth, with France taking the gold. It would seem that the entire nation here had taken this gold for granted and the recriminations started soon after, much in the way they had for Cav and the GB cycling team:


I'm not sure a missile can bomb, but whatever the right pun is the Sydney Morning Herald spared no one. Which brings me to Mr. Bernanke.


The markets have only just begun to pause ahead of this weeks Fed and ECB meetings. The two-day Federal Open Market Committee meeting convenes Tuesday. The ECB meet Thursday, no doubt with a number of the members ready to ask Mario Draghi what exactly he meant when he said he would do "whatever it takes" to preserve the euro. 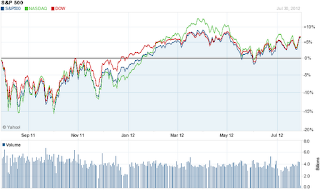 The US markets are back up towards their 1 year highs even as we start to see revenue start to decrease at even the most savy companies (e.g. Apple). With a US economy growing at 1.5% and a stand still rate of 2% needed to just maintain zero velocity we can only conclude that quite a bit of future increases in money supply are priced in. I therefore await any failure to deliver by Mr. Bernanke as another opportunity for markets to final clean themselves out. Of course if he manages to convince his fellow board members to skip down the Keynesian road with him I expect a bigger disaster at a future date . . . the spring gets ever more taught on the crazy Keynesian economy machine:

First unveiled at the London School of Economics in 1949, the Phillips machine used hydraulics to model the workings of the British economy.

Before moving on to something special I wanted to point out the following chart from a Nomura research piece. This one shows Chinese Rebar v. Iron Ore: 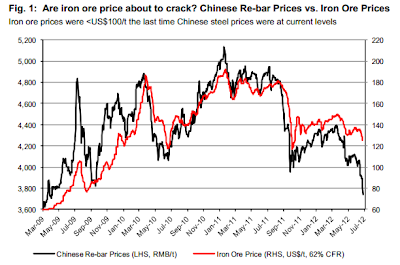 While it is no doubt true that Rebar is more volatile than Iron Ore it is also true that one does not decouple from the other for too long. The question now is which moves towards the other? Nomura says it should be Iron Ore. Make up your own mind.

Now for something special. I loved the Colnago C59 the first time I saw it's chunky lug enforced frame in a shop window. Therefore if you combine this with one of my favorite riders and give it a special coat of paint I think you get something a little bit special?: 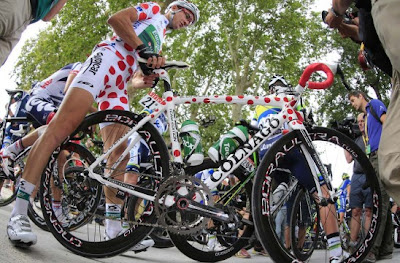 According to Bike Rumor Colnago has just announced a 135-piece limited edition run to celebrate Thomas Voeckler’s 135 points in the race for the Climber’s Jersey at this year’s Tour de France. It's a beauty and yours for for around five grand depending on the fit out. I reckon with Campy EPS (electronic shifting) and the those Bora Two's you'll be lucky to find one under 15k. At least they'll see you coming.