66km's under my belt on a gorgeous day in Geneva. Absolutely pristine blue alpine sky. I got out just before 8am and hit the roads along the lake out into France. I wasn't the only one with the inclination to get out of bed this morning, literally dozens of my lycra clad brothers and sisters were grinding up the hills in the Haut-Savoie. 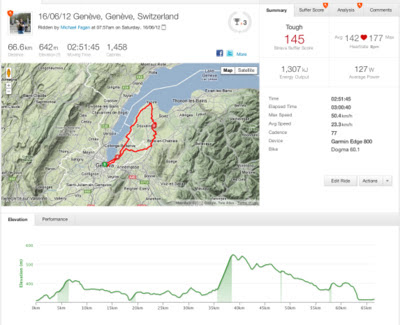 3 hours later I was back in the city listening to my usual list of Saturday podcasts and reading the various news papers. I was getting bored of the whole sky is falling / Greece is a disaster zone tone of the serious press until I came upon an Op-Ed piece in the NY Times by Nikos Konstandaras, managing editor and a columnist at the Greek daily newspaper Kathimerini. It's a great essay because it encapsulates the human side of this tragedy.

Konstandaras summarizes the dilema facing the Greek electorate as a choice between the Nihilistic left and the discredited centre-right, with the middle now no longer a factor. The level of insecurity he writes of is palpable:

"When I go to the A.T.M., I hold my breath until I hear the reassuring whirring sound that says the machine will give me what I’ve asked for. I wonder whether I will be so lucky next time. "

The sad fact is this is a nation divided:

"None of these parties have advanced a serious agenda to avoid disaster. Those who are deeply in debt — or who aspire to gain at the expense of others — hope that the economy’s slate will simply be wiped clean. Those who have stashed their money abroad will be able to buy assets on the cheap if Greece leaves the euro zone. But the people who work hard and pay taxes, who have a stake in reform and progress, who carry the burden of every mistake, have no credible representative to vote for. Those who want a better Greece have to look for the least bad option."

It's a sad commentary on a nation who not long ago hosted the Olympics and had success on the soccer pitch. Both moments of great national pride. Having said that, Konstandaras doesn't shy away from the most damning conclusion:

"What I want to remember from Greece in 2012 is how laziness and years of intellectual sloppiness can waste the gift of freedom and leave open the gates of the city — how we allowed our leaders to pander to us until we had no one capable of leading us, no one next to us at the barricades."

This early 21st century culture of middle class welfare is more than a Greek phenomenon, it's something endemic throughout the G20. That's why the politicians keep bailing out failed institutions, because we the people demand it.  We no longer have the patience to save.