Meanwhile amongst all the doom and gloom the Australian Gross domestic product (GDP) rose 1.3 percent in the first quarter, more than double the 0.5 percent increase forecast. We know that this is yesterdays news because only the day before, the Reserve Bank of Australia (RBA) had cut rates for a second month running, anticipating the coming Euro storm. Therefore I ask how important was this number?

It was good news if you're long Aussie dollars because it gave an excuse to squeeze the weak shorts out. That's about it, because we know that in the last month we've seen the Chinese, the Indians and of course the Aussie's themselves cut forward GDP estimates. Look at the FT Lex colomn today and you'll find an interesting piece on Chinese coal inventories. Stockpiles at Qinhuangdao, the world’s largest coal port by capacity have exceeded levels last seen in late 2008. The port has a capacity of 9mt, in the last 10 days they've been forced to stockpile a further 1.1mt meaning they now have 8.2mt on hand. If no one wants the stuff prepare for things to get pretty backed-up at Newcastle (New South Wales).

I might not be as gloomy as SocGen Strategist Albert Evans, who said in a report on May 8 that he expected Australia to have the "mother of all hard landings", he further stated:

“(In Australia) We see a credit bubble built on a commodity bull market based on a much bigger Chinese credit bubble; of all the bubbles I have seen over the last 30 years in this industry, this one is even more obvious.”

In the un-united states of Euroland the ECB has failed to cut rates. I can only guess that either they a) want to save a cut for when the final axe falls on Greece in the hope that a (say) 50bp cut acts to support markets under stress or b) they figure there's no point as no bank is in a position to lend anyhow given the precarious position of their balance sheets. The German banks, for example are being downgraded today because they have vaults full of dubious fringe European debt exposures. Of course the mother of them all  review of Deutsche Bank will get a review by Moodys when they report on the status of the largest global lenders.

Spain is living in a different dimension altogether. The finance minister said today:

"I have absolutely not discussed any intervention in Spain's banks today."

Well is that credible? So, while he's been too busy drinking beer and eating mussels he left those sort of details to junior officials from the ministery? He took the line that the next report on banks will be June 11 .... and then another one from independent auditors 10 - 15 days later. By my reckoning that kills June off and we know what happens in Europe in July and August . . .  nothing. Shut it down and lets go home ....

Stay out of the financials.

So Criterium du Dauphine continues today and according to my map they're getting closer to Geneva. As my car is now gone I don't know if I can get to any of the stages. 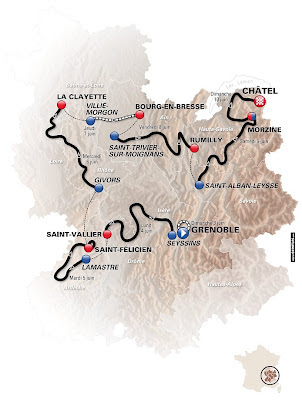 It might have to be the ferry across the lake to Evian and then bus to Chatel on Sunday. I could of course ride? We'll see.