It's raining here this morning and I'm hesitating getting on my bike and heading for the today's stage of the Criterium du Dauphine. I don't want to be accused of being a wimp, but now that I sold my car I can't rely on the support crew to bail me out if I get into trouble. 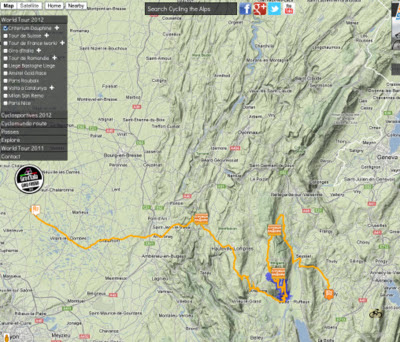 The stage itself will be a cracker, 187km's through the alps just south west of here. I know the hills well and you should see some great racing. I've marked in purple where I'd like to ride to, but we'll have to see what happens in the next 2 hours with this weather.

First, some stimulation for the brain .... 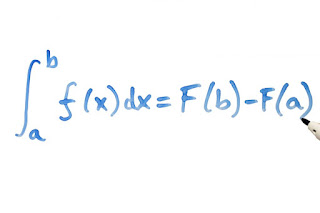 Do you remember when you were first introduced to calculus in math class? I can remember the teacher posing the following question:

"If a frog has to cover 10m to reach a pond and jumps 5m on his first jump and on each subsequent jump covers half the distance of the previous jump, how many jumps must the frog make to reach the pond?"

The problem is one of diminishing returns for the frog and of estimation in mathematics. Either way when Ben Bernanke was finished his testimony before Congress yesterday we all started to understand that the Fed Frog was realising they alone could never reach the pond. The Fed and the ECB are hesitant to act because every additional round of QE is less effective than the previous round. We learned this in Germany in the 1920's and Zimbabwe lately.

All this is bad news for the 1%'ers because that reintroduces the concept of democracy into the equation and as we are seeing in Greece when you do that you might not get the answer you wanted. Asian stocks are down this morning. Welcome to reality.

Asia was disappointed that Bernanke did not offer any policy easing measures and even former Goldman Sach's man Mario Draghi is pushing back by urging Europe’s politicians to do more to solve this crisis . . . . yesterday of course the markets had celebrated China’s unexpected rate cut. Today of course people started to rethink the Chinese rate cut . . . .

“This rate cut is a clear indication the government sees further weakness in the May economic data [due to be released on Saturday],” says Stephen Green, an economist with Standard Chartered in Hong Kong. “But there’s obviously a risk that the increased focus on the short term undermines the structural reform agenda.”

It's a good thought, because the Chinese are starting to understand that the real risk is that they are unable to create an internal consumption model that will allow them to create the un-creatable .... the perpetual motion economic machine. The leadership understands that the only thing they'll create is the greatest property bubble since that other savings juggernaut Japan started its long road to ruin in the late 80's. Sorry China. 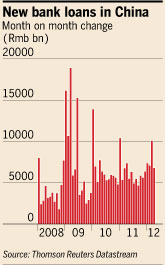 I got a laugh at the expense of Louis Vuitton when I read a piece on CNBC regarding the possible fading of the mega brand in China:

"The truly wealthy, the real millionaires, they will not want to buy LV Louis Vuitton or Gucci because they are too commonplace," said Shaun Rein, managing director, China Market Research Group. "Rich people are getting richer and they want exclusiveness and more self-indulgence."

If this is China then the government is truly stuck in a hard place.

I'd rather be in Australia (obviously given my impending move) than Spain as Fitch downgraded their credit rating three notches to BBB, citing the cost of restructuring and recapitalising the country’s embattled banking sector. Having said that having the RBA's chief teller telling people to stop being gloomy about the economy strikes me as disingenuous from an institution that has lopped off 75bps from its benchmark rate in two months because it sees external shocks heading for its shores.

Yesterday the international press was trumpeting Australia's ability to sidestep the global economic problems when it created a slightly unbelievable 39,000 jobs last month in the face of an expected contraction of 5,000. Well today most people outside of my home town of Sydney will have missed
that 10,000 jobs will be cut from the public service. These aren't janitors and messenger boys, these are 10,000 properly paid full time pension backed jobs. I'd humbly suggest these outweigh the 39,000 barista positions created in the job report yesterday .... OK, maybe I'm over doing it, but them are the approximate facts. Oh, and in case you want to ignore that think about the fact that GST payments that are collected by the federal government and then allocated to the states has in the case of NSW collapsed by $5bn since September. Thats a lot of cash at the state level and speaks volumes as to the consumer downturn. Stay short the AUD.


“At best, rapidly rising levels of debt will lead to reduced rates of capital formation, slower economic growth, and increased foreign indebtedness,” Bernanke said. “At worst, they will provoke a fiscal crisis that could have severe consequences for the economy.”
Posted by Mike Fagan at 08:54