Hell week. Not just for European leaders but also for me. This is the week for packing and moving. It's not going to be fun. It takes roughly eight weeks for my household goods to arrive at my house in Sydney. In that time I'll be living out of a suitcase and in a house with minimal rented furnishings.

Is George Soros long the Euro? I don't believe the king of macro currency trading ever does something for completely altruistic motives.

Interviews like this are adding to the international pressure on Merkel to let the children have their Xmas toys early (i.e. "euro" bonds). We know that Soros sold most of his gold holdings back in May when it was reported that he was of the view the commodity was forming a classic bubble. His holds seemed to be centered on various ETF's (see below).  Of course there is a school of thought that says part of his rationale may have been that he was starting to see the breakdown of the shadow banking system and the with that the derivatives of first order commodities. 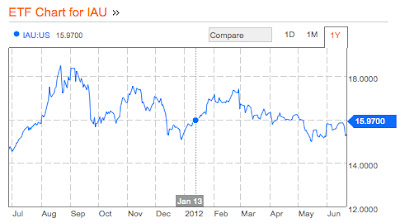 It's difficult to know, but clearly a long Euro play would suit an investor known for liking the counter intuitive and for squeezing markets. Time and his next quarterly reports should tell us more.

The other big things this week are the Spanish deficit numbers and the US housing numbers (Case-Schiller). I don't know what to expect from the Spanish, but maybe the worse it is, the more pressure Merkel will be under. I hate this double-dutch logic, but that's how the market has been functioning for the last 3 years. Obviously the market will be looking for some deflationary numbers from the rest of the eurozone concluding with the total inflation numbers for the zone on Friday.

Those saviors of the west, the Chinese have some deflationary problems themselves in housing. Numbers continue to show non-tier 1zone prices falling (i.e outside of Shanghai, Beijing, etc.). 15% or so of the entire economy is focused in this space and therefore should put pressure on the overly optimistic GDP 7.5 - 8% f/c range of the market. The world should watch this carefully. Stay short AUD.

Finally I can report that my faithful stead, my Pinarello Dogma is now at my local bike shop being taken apart and packed for shipping. So that means no riding until my Cannondale hits Sydney around July 15.