Another milestone for me today as I sold my much loved car today. This will be my sixth major move since 1997 and no matter how dispassionate you get about things there's always something that you have to sell or leave behind that leaves you feeling a little hollow inside. I don't think I've ever owned a better car than my Mercedes ML350 CDI 4matic. I've owned BMW's and Porsche's, but for all round livability they just didn't match it. That diesel engine is superb . . . moving 2+ tonnes of car so efficiently shouldn't be possible. Cruising at 130kmh on the motor ways of Europe barely pushes the economy gauge above 10 liters per 100 kilometers, in fact sit on 120 and you hit a sweet spot that will have you nodding with approval.


I was surprised that it took only 12 hours to find a buyer for a car in this market. I don't know if anything has changed over the weekend and was surprised that the US markets tried to rally early as it seems to me that the situation was getting worse not better. I don't expect much to happen prior to the Greek election . . . why would it? If you were Madame Lagarde who would you talk to in Greece? They don't have a government, so you could fly as many kites as you like but no one will be there to snap the photos.

I was interested in reading about the selling of private equity stakes by financial companies as highlighted in the FT today. Remember a couple of weeks back when Barclays sold a stake in Blackrock because of the pressure Basel III requirements put on ownership of these type of holdings? Well it's not going to stop anytime soon. Apparently it's got a lot to do with something called the  European Union’s Solvency II directive. I've never looked into before, but from what I can tell it delves into the liquidity of an institution's shareholdings. It comes into being in 2014, which in private equity time is just around the corner. In my mind this makes the coming downturn more nasty than 2008 because at that time governments and financial institutions declared a truce on mark to market accounting in order to avoid exacerbating the run on banks balance sheets. We don't have that consensus this time. Stay short the financials, especially those with highly illiquid non-listed / pre-IPO holdings.

Oil is going down. It's going down a long way and it won't stop unless we get a political event or a weak US dollar. I like oil in the long term and would be long it again if the US moves into QE3. I think it's a cheeky hedge against inflation. I like it more than gold at this stage in the search for a hedge against inflation. I also like having something that can have a "black swan" upside as opposed to downside. Watch crude especially the long end of the curve.

I managed to get out on the bike for two hours earlier today and happily managed a new personal best on the climb I was attempting. Strava really is a fantastic app and I've mentioned it on this blog before. The Ballaison depuis Loisin is a short Cat 4 climb just over the border in France. Its a pleasant hill that slopes up at an average grade of 4.6%. It took me 3 minutes more than the fastest recorded time on the climb and so yes I have some room to improve. My aim is to do it in 7.5minutes. A modest goal, but one that would see my average speed on the hill go from under 15kmh to about 16.5kmh. I can assure you that for a man my size it would be a very satisfying milestone. 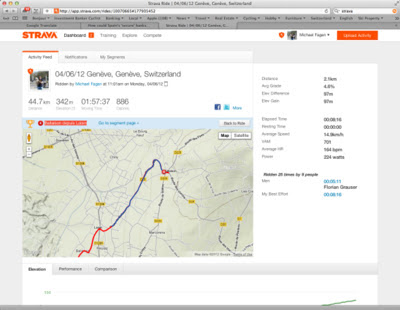