This is my Friday blog a day late. Sorry, but the packing and saying good bye to people is cutting my reading time down. It's also cutting my riding time down. I managed to get the Pinarello out today (Saturday) with my bullet proof Campagnolo Bora wheels. I think I'm going to give up on the Eastons as I'm not going to risk getting stuck in France again without support. I just couldn't face the indignity of another long cab ride home in lycra. Maybe the Eastons will come in handy around Sydney where my rescue options will be more plentiful. 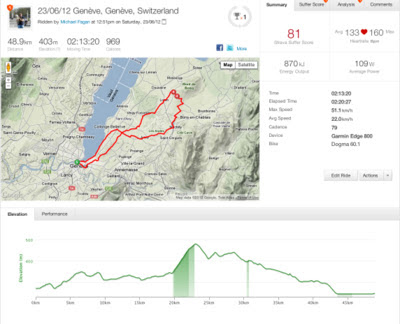 When Moodys downgraded banks on Thursday there was a lot of cynicism regarding some of the conclusions. Much of the financial gossip has focused on Morgan Stanley, but in my mind their problems are no different than many of their peer group. Also if I hear one more CNBC "money honey" interview telling me this is all priced in I'll scream!

I mentioned recently the SNB's targeting of the capital adequecy of the CS balance sheet. CEO Brady Dougan is in the hot seat and because he's continually insisted they had enough capital and he's American. I believe the Swiss are intent on replacing him with one of their own. It's typical of this country that when things get bad they pull up the drawbridge expel potential infiltrators. Right now the Swiss nation feels under siege by a faltering Europe that is causing the SNB to debase their cherished CHF in order to save uncompetitive Swiss jobs. Basel III says that CS needs core tier one capital of 7%, but it probably has under 6%. Add to that that the Swiss have imposed a 10% hurdle because of the systemic importance to the country of CS (and for that matter UBS) and you can see the problem. They probably need to raise about CHF7bn to get over the 10% hurdle. He should have cut the dividend a while back, but clearly he felt he had a duty to shareholders who have seen their banks stock fall 80% since he took over. There may be another angle here as well . . . perhaps the Swiss are actually saying to Mr Dougan that he needs to shrink the bank, rather than continuing to raise more tier one. The choice is not an enviable one and if I was a Swiss banker looking for a top job I'd start to dust off my CV and call a couple of SNB board members with the news that I was available.

Breaking-up is hard to do, or so the song says. Frau Merkel is fast losing her famed patience with the verbal diarrhea of France's  President Hollande. You can see it getting worse everyday. The Germans are not willing to allow the growth cartel to go out and start writing cheques on Germany's accounts. This continuing demand for the euro-cracy to issue bonds is crazy. And to call the paper that may come about "European" is a joke. It's actually Germany that will be doing the guaranteeing. Whats the point of getting a promise to repay a debt from Europe when 12% of that promise is from a near insolvent Spain? the next "summit" is June 28 & 29. You know what? Why don't they just use Skype like any other business that wants to save money?

A while back I was playing the AUDCAD cross pair in the belief that the Canadian exposure to inflation linked oil should be favored over the Australian exposure to China. Now what I hadn't considered was just how leveraged that average Canadian household has become. The WSJ reports today that Household debt in Canada hit a record in the first quarter of this year, at 152% of disposable income. The boom in Vancouver and Toronto looks to be slowing, but that hasn't stopped the government brining in new rules regarding mortgages:

1. The maximum mortgage amortization period was cut to 25 years from 30
2. The amount of home equity Canadians are eligible to borrow against was cut to 80% from 85%
3. Taxpayer-backed mortgage insurance was limited to homes valued at less than one million Canadian dollars.

Canada and Australia are similar in the requirements for mortgage insurance, but here's the news on this .... in Australia most of that insurance is done through the private sector and backs out to? You guessed it - America. I need to do some more reading on the Canadian governments insurance scheme and decide if thats actually leading to a dangerous position for the land of the maple leaf. Oh, Canada .... !

I'll try and write another blog tomorrow to make up for the lateness of this one.