Bad data has started to hit the street and for investors the old adage of sell in May and go away could be the wise move. Last year that tactic didn't work and as people's memories are now building up an immunity to being out of the market it will be interesting to see what effect the recent stat releases will have on trading in the coming weeks. 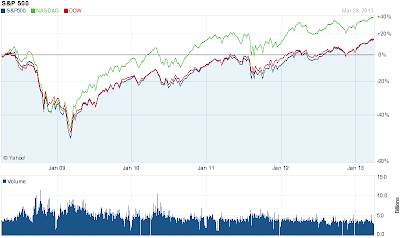 The US ISM fell to 51.3 in March from 54.2 in February, the market had expected 54. The only redeeming news was from the housing market where construction grew 1.2% after a 2.1% decline in January. Housing is the main beneficiary of the Fed's largesse and I remain bullish on the space. Businesses in the North East are starting to report a tightening of available office space in cities such as Boston. I am waiting on some further numbers but would say that the market is well aware of this and conditions have been priced in to a degree. NY interests me as new floor area seems to be coming on to the market steadily and therefore might not have the same lift yet as other business areas who have been out of the construction cycle.

Japan for all the bravado of the recent moves remains less than bubbly. The Bank of Japan’s quarterly Tankan report showed a reading of minus 8 (up from from minus 12 in December) in the large manufacturing sector on the back on the weaker JPY.

The trend is fine but it didn't stop the rot yet as evidenced by the slump in Japanese vehicle sales which fell the most in six quarters after government subsidies ended. No doubt many say that these figures are already in the market and have been the basis for the recent moves by the BoJ to weaken the JPY. I wouldn't argue too much with this only to say that the market now has priced in a recovery from these horrible numbers and anything less than a complete bounce will lead to renewed negativity.

Meanwhile the Chinese PMI rose slightly from 50.1 in February to 50.9 in March. Many readers will know that I am not 100% convinced as to the accuracy of China's statistics and therefore would advise investors to look more closely at the trade numbers instead. China is not so domestically focused as some would have us believe.

At least in M&A China has been given some outlet for it's reserves beyond US T-Bonds. Taiwan will let Chinese banks own as much as 20% of some financial institutions, raising a limit on mainland ownership from 5%. Good news if you own Taiwanese financials. It's been talked about for some time, so some of it is in the price. If I were a HK investment banker I'd be sending a present to the Taiwanese government as they have effectively under-written my job for a further year.

Much the same goes in respect of Nasdaq OMX, who offered as much as $1.2bn in cash and deferred stock for a electronic bond trading platform from BGC Partners, an interdealer broker. I was beginning to get M&A jitters last week, but it's this type of activity that helps me sleep with markets at these levels. I'm not sure that BGC will put the money back into the market, but at least they have plenty now to fight another day.


Goldman Sachs clearly believe in leverage again. They've decided to create an entirely separate holding company to raise external equity capital. I'm sure they got tired of top Investment Bankers leaving the "family" and decided that given the current regulatory restriction and market opportunities that they needed to do something. They'll offer shares in a new unit, Goldman Sachs Liberty Harbor Capital LLC as soon as is practicable and effectively side-step Volcker Rule by calling it a BDC (Business Development Corporation). Other banks seem afraid to follow once again proving that you can't beat GS for "balls" in the face of regulatory pressure. Good for them and their investors.

For those who follow my Strava feed you will have noticed that I did a bit of riding over the Easter vacation here in Sydney. The most solid hit-out I had was the 800+m of climbing over only 41kms between Mt Irvine to Blackheath west of Sydney. Only another 35k's on Sunday before my riding partner had a mechanical, but enough was enough. The Cannondale need a solid 2hrs of cleaning here on Monday due to the fine red dust that was coating the drive train. I really can't emphasise enough how important it is to keep this powder out of your bike's workings. It's spotless now ready to be taken in for the yearly service which will cover headset, bottom bracket and cables.

On Monday I did another 65kms with some mates here in Sydney and decided that my legs needed a rest today. I rode the Pinarello and can only say that I advise people to slow down when it rains and your realise that your carbon wheels breaking surface takes 2 - 3x as much distance to bring you to a stop compared with Aluminium. I survived well enough, but lost the peloton for a stretch as a I battled to avoid the limited holiday traffic.

Sunday will be epic. I dare you not to watch. Maybe some late night research for me in front of the TV reading through office rental stats in the US while watching the hardest one day race on the calendar.
Ciao!
Posted by Mike Fagan at 06:34