Apologies for so long between blogs, but while riding last week I suffered a series of dizzy spells. The only way I can describe the feeling is it was like that hangover you had after first time as a teenager you got into your parents liquor cabinet and decided to try a little of everything. I stopped multiple times and was quite concerned that I might be suffering a stroke, brain tumour, inner ear infection or something in between. 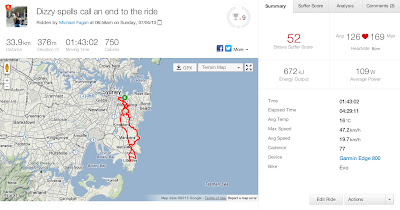 The attacks went on for 48hrs and since then I've been OK. I am awaiting results from blood tests and will even see a cardiologist today as part of a complete assessment of what happened. My money is that this will turn out to be some kind of virus, so if you suffer the same symptoms I suggest you see a doctor ASAP.

I managed to get back to riding early in the week inspired somewhat by the action from Paris Roubaix. In case you missed it Fabian Cancellara's win was mesmerising. The final man on man battle on the velodrome in Roubaix was fantastic and well worth watching again:

It's a great race and even though it lacked the mud and rain of some of the most memorable days we got the second fastest time ever and clouds of dust off the cobble stones which must have caused some serious post race cleaning hours to be put in my mechanics at the team buses. One interesting tradition of the race that the TV cameras don't get to see is the old shower block where the stalls have the names of past winners. Cancellara has won the event three times and admitted on twitter that he still hasn't been in them: 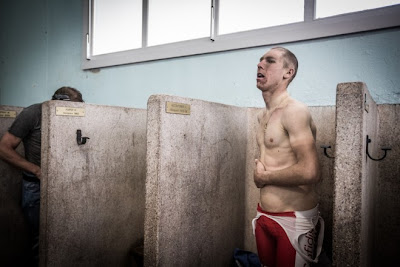 I can't blame him especially on a cold day it must be terribly uncomfortable compared to what they have on the team buses now days.

Continuing on the cycling theme with an eye to the Giro I noted the latest limited edition jersey offering  from Rapha in collaboration Paul Smith: 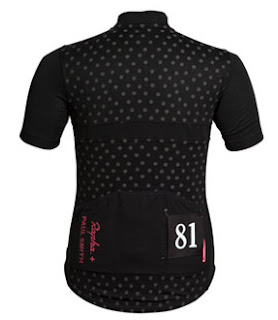 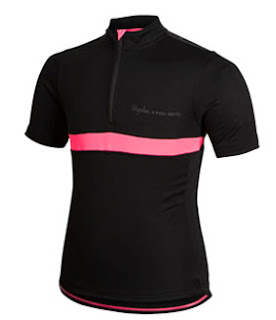 I like the details on this jersey including the reflective dotted back. The jersey has a story like most of these Rapha limited editions:

"The Tour de France has the Lanterne Rouge, an honour awarded for the last man across the line. The Giro d’Italia also has such a prize, called the Maglia Nera, the Black Jersey awarded to the rider who has suffered immensely just to finish. Organisers have recently started awarding the Maglia Nera again at the race; now presented as a unique dossard or race number with a white number on a black background. The number 81 on the jersey relates to Luigi Malabrocca, who won the maglia twice in 1946 and ’47. Naturally, Rapha and Sir Paul Smith’s love of the Giro d’Italia brought the idea for such a jersey about."

I've seen the black jersey won by Giovani "Nani" Pinarello in 1951 which marked the start of his company due to the fact that the team owner thought it was a better investment to loan him money to start his own bike building shop rather than keep him on as a rider. 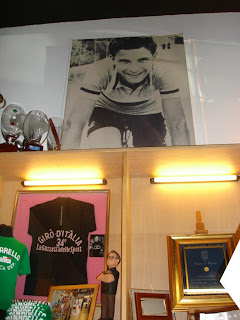 My vertigo on the bike seems to mirror what the markets are feeling at the moment. The US reached yet another record high reminding all of us of the continuing liquidity bubble now upon us. Amazingly with money being printed with very little pause to contemplate the possible ramifications gold has continued to fall. I've never been a gold bug and pointed to the fact that the way the markets had accumulated gold via ETF's over the last few years was more of a concern to me than the fundamentals of the money supply itself. Since then some of the bigger gold bulls have liquidated positions. Now though it may be time to look again at the commodity. I'm prompted to look at taking a position by the super aggressive increase of the monetary base in Japan. Gold has had 650% rally from August 1999 to August 2011 and now many of the investment banks that had pushed forecasts ever higher have pulled back and now see it as having a sub-1400 price target. That may well be the case, but effectively also says that printing money and the gold price have nothing to do with each other. To me gold looks interesting at the current levels if you believe the US economy needs more QE. Watch this space.

The other commodity I've been keeping an eye on is iron ore. Some weakness lately was caused by perceived weakness in the Chinese numbers. This is looking to have played out after the Chinese trade data seems to be pointing to a recovery of sorts. 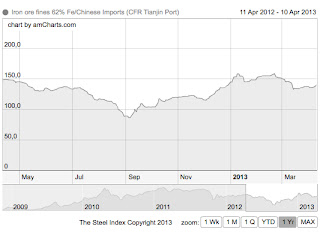 I remain somewhat sceptical on most Chinese data especially where it implies internal consumption growing to offset any weakness in exports, but maybe in this case we need to pause for the big picture. Iron ore bears have been suggesting for a while that prices at the current levels is of itself a brake on growth. To me that argument would have more validity except for the remarkable stability we've seen for the the YTD. The weakness of the US dollar is in itself a floor under commodities and if you believe that QE is ending than maybe iron ore, like many commodities will pull back. I tend to think that QE very well might be coming to an end in the US as more members of the Fed board openly discuss the way out of monetary base expansion.

George Soros delivered a speech yesterday at the Center for Financial Studies, Goethe University in Frankfurt, Germany. It makes an interesting read in that it contemplates further troubles in Europe. His solution is financially simple, but (and he acknowledges this) politically difficult:

If my analysis is correct, a solution practically suggests itself. It can be summed up in one word: Eurobonds. If countries that abide by the Fiscal Compact were allowed but not required to convert their entire existing stock of government debt into Eurobonds, the positive impact would be little short of the miraculous. The danger of default would disappear and so would the risk premiums. The balance sheets of banks would receive an immediate boost and so would the budgets of the heavily indebted countries because it would cost them less to service their existing stock of government debt. Italy, for instance, would save up to four percent of its GDP. Its budget would move into surplus and instead of austerity, there would be room for some fiscal stimulus. The economy would grow and the debt ratio would fall. Most of the seemingly intractable problems would vanish into thin air. Only the divergences in competitiveness would remain unresolved. Individual countries would still need structural reforms, but the main structural defect of the euro would be cured. It would be truly like waking from a nightmare.

For Soros the Euro has to be saved, but I'm not so sure that the average northern European citizen feels the same way. The summer months may see the crisis rear its' ugly head again and it's only when the trouble penetrates into core Europe that we'll get answers to these questions. I highly recommend reading Mr. Soros' speech.