The best way to celebrate a visit to your cardiologist is to go out and ride your bike . . .

Well I did the heart stress test with ultra sound and echo at St Vincent's hospital in Sydney this morning. I know thanks to my weight loss in Singapore and becoming a "person of the bike" that I'm now in the low risk category for heart problems. Having said that, I defy anyone to go through that test and not have at least a couple of "darkish" thoughts about obscure findings that in no way reflect your own general sense of well being. Anyhow, in celebration of a preliminary "clearance" I hit the road this afternoon in a new pair of Rapha Pro-team bib shorts. They're tighter than the classic style I've been riding of late and I possibly could have gone a size up, but that would defeat the purpose as these are supposed to fit like "body paint' and they certainly do that. I liken them to some of my Castelli shorts that I swore by until recently giving them an honourable send off. Neither brand is cheap so the deffinition of bargain depends on how well you judge them to do their job. Either way I'm happy with these. Oh, . . . and I'm happy to have today's stress test behind me.

I think most of the stress around me right now is with the gold bugs. The recent route has been extremely painful to holders of Australian and Canadian junior producers. I can hear the brokers now . . . "mate, this thing is trading at a discount to proven reserves!" Somehow they're missing the discounting mechanism of the stock market. The old adage goes that the market trades 6 months ahead of reality. If they proves to be the case I'd suggest people are now expecting physical gold to go lower.

Listening to Christine Lagarde recently being interviewed on the BBC has me wanting to watch gold carefully. Madam Lagarde always leaves me confused, you know she's a Keynesian first and a socialist second, she embodies the French attitude to everything in finance and economics. She mutely praises austerity while pushing central bankers to print more money. Does Mdm Lagarde own gold? Certainly you would think she should. The more she argues for growth, the more you know that we haven't seen the last of inflation. This blog has never been a gold bull, but neither has it been a bear; rather I've always said that the real-store of inflationary effect will be felt through petro-dollars at some time in the future.

Here in Australia a consensus seems to have been reached that the budget is unlikely to get back into balance anytime soon. That old champion of left wing economics Ross Gittins of the Sydney Morning Herald was the latest senior commentator to suggest that the Keynesian war was won:


It's amazing that he can rationalise the state of the budget and suggest that the spending of the politicians has so little to do with any surplus or deficit. To suggest that during the Howard years or even the Hawke/Keating years the surplus was, oh, an accident defies credibility. Governments make clear decisions about what to spend and those that ignore a boom by spending carelessly will repent in a recession when the cupboard is empty. Today Australia recorded its slowest core consumer price growth in 14 years, the betting now is that the RBA will have to cut rates and that of course will start to weaken the dollar. It's a pity Mr Gittin's didn't allude to the dollar in his piece because if the RBA can get that down through parity this hapless government might be thrown a lifeline before the September election.

My charts of the day: 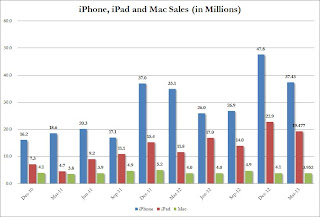 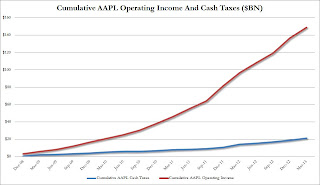 As readers know I like to follow Apple (AAPL) because in many ways it is the bellwether for American investors. The upper chart shows the segment sales for the company's products. The worry here is not the fall in iPhone sales, we've had that before, but rather the rise of smart phone sales by its' competitors. Coming back against no competition was as easy as a new thiner case and some snappy apps, but now against Samsung and the cheaper android driven phones it's not so easy. The bottom chart shows Apple operating income v. taxes. Admittedly I could have produced the same type of chart for a number of US majors, but this one is the most egregious. At time when the company is borrowing US dollars onshore to increase the dividend rather than paying out from their offshore cash pile and paying the associated taxes Apple is thumbing its' nose at the legislature and daring it to act. Mr. Cook the Apple CEO may have taken the smart option in the short term, but has he taken the right option? The stock price popped and then fell back . . . they'll be more to come on this one.

Today's ride was once again on my trusty Pinarello Dogma 60.1. The more I ride it, the more I appreciate its' handling and comfort. It's still a racing thoroughbred, but not in the ultra stiff way the Cannondale is. I really love the Campagnolo Bora's with tubular tyres as they make you want to go harder than when I ride even quality clinchers like my Fulcrum Racing Zero's or the more aero Mavic Cosmic Carbones. If you've never ridden properly lightweight tubular wheels before I suggest you save your pennies and get some for Christmas because you'll never turn back.