Last year some $3.5tn of foriegn funds were invested in the Dutch economy and $2.28tn in Luxembourg. Massive numbers in both cases that would normally have you thinking that inflation in such small companies would be rampant. Of course the real story here is that only $573bn ended up in the “real” Dutch economy and $122bn in the Luxembourg neighbour, the rest is part of various SPV's  meant to shield companies from the usual national taxes payable on profits. I've said before on this blog that these type of jurisdictional anomalies exist for a reason, mainly to enhance (in these cases) the economies of the Netherlands and Luxembourg. The trouble of course is that both of these countries belong in the EU and therefore is seen by many to undermine the tax base of various member states. My former home of Switzerland seemed to spend most of existance thumbing its' nose at various jurisdictions before finally realising that the model was breaking down. The post 2008 world seems to me to be in no mood to accept this evasiveness anymore and via a combination of carrots and sticks will eventually unwind the anomalies.

The Irish for all their failures to secure a sound basis for their rapid growth in the 10years prior to the crisis have stuck to their guns and kept corporate tax rates much lower than the EU average. The socialists who have dominated the EU for many of these years have always considered the Irish an exception to be wooed back into line, but now we're seeing places such as Portugal try the same trick by lowering their own corporate tax rate to 24%. I actually don't think that will be low enough in the arms race to attract investment, the UK is likely to cut into the low 20%'s itself, which with its' various advantages (legal system, workforce, language, etc.) should trump most players. If it wasn't for the troika and the strings tied to various bailout packages I'd be telling the PIIGS to cut personal taxes as well in a fashion similar to what happened in Russia in the 90's.

Russia replaced income tax rates of up to 60% with a 13% flat tax and in so doing saw personal income tax revenue rise by 25.2% in the first year, 24.6% in the second year and 15.2% in the third year. I know the Laffer curve has been given a bad name by the renaissance of the Keynesian economists, but the results of the Russia experiment is just too obvious for the incompetent and corrupt systems of some of the victim countries of the 2008 crisis to ignore, even if their masters in Brussels would prefer to brush it aside as not applicable. My point of course is that the Netherlands and Luxembourg situation would not exist if a more rational rate of corporate tax was available and the biggest winner might just be the United States. Would Apple be borrowing to pay out a dividend, rather than using its' overseas cash reserves if the US tax rate was closer to 20%? Would that help growth and spur job creation in various jurisdictions. Whenever I rode my bike out of Geneva to the foothills of the Alps I would pass the offices of Caterpillar Europe; it wasn't in Switzerland because of the demand for hydraulic shovels.

As an investor what does this tell us. The opportunities for macro investment will be best in systems that drive growth via competitive reform of tax and other revenue sources. The UK should be in a better position in the next 2 years leading into the election because for all its' problems it remains sceptical of Europe and importantly retains the flexibility of the pound along with the most transparent and business friendly legal systems available to commerce world wide. As an aside, if you want to get some insight into the UK economy I suggest you read the paper published on April 23rd by the UK Treasury that deals with the prospects for an independent Scotland.

Geneva hosted the final stage of the Tour de Romandie on Sunday. The stage was a time trial that went up both sides of the lake with two 180º turns at points I am very familiar with.

I must admit that the grey skies and the beautiful lake front brought back good memories for me as a rider. I always knew after a long ride into the Alps that as soon as I could see the Jet d'eau that I was almost home: 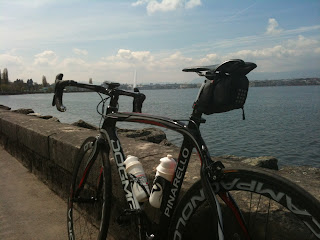 It took just over 21mins for the riders to cover the 19km course. Here's how I can compare to that. During last years Tour Du Leman I completed the 2.2km section known as Le Sprint du Quai de Cologny in 3'45" and this formed part of yesterdays time trial course: 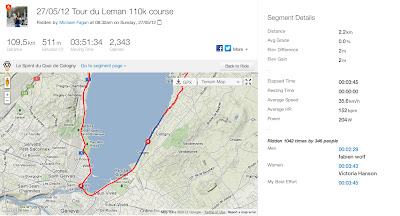 The pro's yesterday would have completed that section in around 2 minutes and averaged closer to 60kph. I'm not sure Tony Martin, who won the stage would have noticed the "Jet", but I'm sure he would have been celebrating in some pretty familiar clubs and bars along the lake front later.