Apparently it was the European Union and not the USA and Soviet Union via mutually assured destruction (MAD) that stopped Europe from going to war in the last 50 years. Maybe it's just me but wasn't NATO the policeman of the peace? Wasn't the EU just an economic grouping that made sure that Italian, German and French farmers got to sell their costly goods at equal prices across a continent?

The Nobel Committee which was last seen disappearing up it's own proverbial when it awarded Barrack Obama the Peace Prize in 2009 has now officially donned the funny green wig, red nose and size 24 comedy shoes to prove what we all suspected that these people are a team of clowns by awarding the 2012 prize to the European Union.


If that wasn't enough we had the spectacle of the IMF closing it's meeting in Tokyo with warnings that not enough was being done to stimulate economies. Lot's of debate surrounds the conclusions due to some fancy figure work at the IMF regarding the fiscal multiplier. Essentially this is the number used to show the net effect of each dollar spent by governments in relation to the output they provide in GDP. It would seem that the IMF has played with this to imply austerity is more harmfull than previously understood. I won't get into the argument other than to say that it shows how far to the Keynesian path the world has swung in recent years that this becomes such a core issue. As I've said many times the issue for most of the troubled economies dragging down growth is one of solvency, not of the liquidity being used to pump up economies.

None of this is helping the Spaniards who remain in denial regarding their problems. It now is becoming more likely that the budget there will suffer further blowouts even allowing for tax rises and cuts in the health services. The government debt will grow to 85% of GDP this year as Madrid absorbs some of the banking problems. Of course this figure becomes worse when you include the states now asking to be bailed-out. the Spanish 10year is back up to 5.85% and highly dependent on the ECB's continual monetization program.

Swedes Finance Minister is at least calling it like he see's it. He said this week Greece may quit the common currency within the next six months. Maybe they should take the Spaniards with them?

I said I'd keep readers up with the problems I've been having with the handlebars on my Cannondale. I managed to source a new stem which I had a Cannondale dealer here in Sydney put on the bike. All went well until they slipped violently coming down the hill towards Bondi Beach on Saturday morning. I was doing close to 50kph at the time and it shook me up. I stopped off at a bike shop near Centennial Park and had one of the young mechanics take a look at it pre-open. He tightened it the best as the shop hadn't opened we didn't want to risk going further without a torque wrench. So I decided to ride very carefully to the Cannondale dealer who had installed the stem, as he didn't open until 10am I opted for breakfast at Attelier De Velo where the guys are always available to check things out. They torqued it up to 6NM and still got slippage. They cleaned off the carbon compound paste and relied solely on the non-slip surface FSA uses and that also failed to work. So we put on some different compound and torqued up to 5.5NM for the ride home. I stopped by the dealer, but the head mechanic was off duty, so no luck. I'll probably take it back on Monday and see what he says. I reckon I'm destined to swap the handlebars and stem over to a Aluminum set. Saving component weight is not worth the potential ride home in an ambulance. 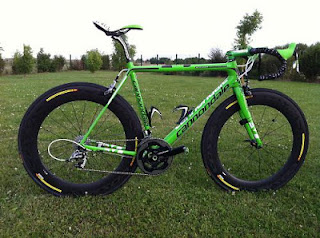 This is Peter Sagan's Cannondale he rode to celebrate winning the green jersey in this years TdF. If you look closely you'll notice that he uses an FSA SL-K stem forged from Aluminum. He pairs that with FSA Energy handlebars. The reason he's riding on a cockpit set I can buy for AUD 187 (84 + 103) instead of 550 (250 + 300) is that he knows that he won't get handlebar slippage, cracked stem or broken handlebars if he uses Aluminum. Why bother saving 100grams? I've learnt my lesson.