Tax is a very sensitive subject to most people. Letting government(s), colleagues, friends and family know how much you make or don't make is a minefield. I always appreciated the brevity of the Singapore tax system. In Singapore my taxes took about 15minutes to do on line and didn't require me to keep endless receipts for things hanging around the house for years on end. You felt un-violated by the process and personally free from worrying about random audits. The tax rate was low enough that you didn't feel the need to try and avoid it. Everyone felt they were getting a fair shot.

Of course if you are a wealthy Greek you deeply resent your government and the associated tax system, in fact not to do so probably would make you some type of pariah amongst your friends. Over the weekend Greek weekly magazine "Hot Doc" published a list of 2,00 Greeks who held accounts at HSBC Private Bank in Switzerland. These names come from the disks stolen by a whistle blowing employee a couple of years ago that led to some pretty embarrassing revelations around Europe.

The Greeks list from HSBC is interesting as it includes a number of politicians and members of the ruling elite. If you're not part of the elite you just got another excuse to be angry. Worse still this information has been available to authorities for quite a while. I guess with all the changes ministers have been able to say absurd things such as "we lost the disk" and be semi-believable in doing so. That was fine when everyone (everyone that matters at least) was assumed to be cheating so the common interest was in keeping this brushed under the carpet. The problem is that the Germans and for that matter Europe in general needs to get Greece working a little more like Singapore and so they're not going to let claims of "corrupted USB sticks" stop them from getting their money back. An investigation of 54,000 Greeks who transferred a total of about €22bn to accounts abroad between 2009 and 2011 is also hanging around like a bad smell. When a system is this corrupt it's hard to blame people for storming the Bastille etc.

Just so you don't think tax dodging etc. is restricted to failing economies you need to check out the NY Times' piece on Chinese Premier Wen Jiabao’s family. I know 2.7bn doesn't really put him or his family in the same weight class as some of Russia's politicians, but it's a good start for a man who claims to be "of the people". I guess he's lucky that China doesn't owe the Germans any money? The FT has a piece today about Chinese banks leaving London because of the new regulatory regime. My old friend the FSA is holding out on giving the Chinese branch licenses because they really don't recognize China as having a suitable regulatory system when it comes to transparency or capital levels. Luxembourg, home of Trek Nissan and the Schleck brothers is happy to take their word for it and grab the business. What a mess!

All of this is just another reason why I'm surprised that so many banks are willing to bet the house on the wealth management of the international mega wealthy. I'm pretty sure that UBS for example in axing another 10,000 jobs is getting rid of a lot of dead wood, but it's probably also leaving itself open to a new concentration risk, albeit one less likely to blow-up Switzerland itself, but one likely to leave it open to avenging tax inspectors of many bankrupt countries. Perhaps more thought needs to be put into these strategic moves? You know, just because it's fashionable doesn't mean it will look good a year or two from now. Think before you jump.

I had a nice weekend on the bike, especially on Saturday when I managed to complete the full Sydney beaches run between Sydney Harbour and Botany Bay. Maybe I should call this one the Cpt Cook special? 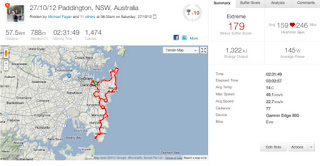 Sunday was a bit different as it was day 2 for my sister in law in cleats. She managed really well with only one fall to report. It's hard when you first start riding a proper road bike to get the timing right for un-clipping and braking when you want to stop, so I completely sympathize with the fear factor of falling. Mind you she picked up the use of the SRAM Force gears quicker than I expected. I think too many new riders fear the gears when they first get on. They either are reluctant to change so as to maintain a high cadence or they think they're going to break something. Well anything can happen, but as I try to explain to people unless they do something stupid it's pretty hard to break a bike, even a carbon fiber one. Just relax and enjoy.

It's getting colder in Europe now and I have to admit that I kind of miss layering up before hitting the road. I was cleaning up my riding gear the other day and I had to laugh at the various outfits I'd acquired in order to keep the cold, rain and snow out when riding in the alps in autumn. My favorite piece remains my Assos Airjack 851 which kept me warm as the temperature dipped below zero. I believe there's a new name and model this year, but if you need to get out on the bike it's worth checking out what they have to offer.