Here's a chart I got from Zerohedge. It's a nice follow-up to yesterdays's blog as it shows the disconnect between the Global Manufacturing PMI's and equity markets. If you remember I pointed out the contractionary numbers printed by Australia and China on Monday which were very much at the core of the RBA's thinking when they cut rates yesterday. 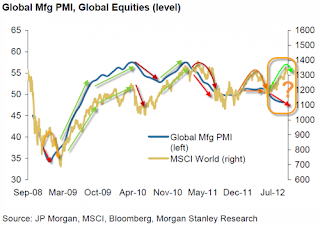 I know very few people want to be reminded about this stuff, but what it speaks to is the gap between QE and the real world. Unless you are producing stuff that is consumed a monetary policy predicated on ink and paper only is doomed to fail.

I'm lunching with an old friend on Friday who know is going to ask for some investment advice. You know I want to just tell him to sit on cash at the moment, but that's probably not going to cut it. I know a good rule of thumb used to be that once you're over 40 you start buying bonds at percentage proportional to your age. How do I suggest that given where bonds currently trade?  The BIS released a report on Monday pointing out that sovereign bonds were being overvalued in terms of "riskiness". If banks are buying up questionable soveriegn debt and ranking them as "riskless" then I have a feeling that you don't want to be in them, because when the clean out comes you're going to be in trouble. 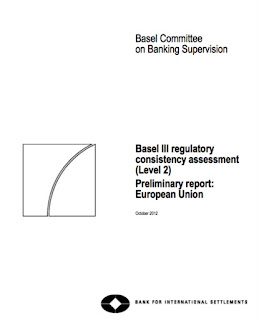 Of course part of me is excited about the fact that report said the implementation of Basel III was behind schedule etc. As I've said on this blog before we are in the middle of a solvency crisis which Basel III is not helping to alleviate. So good news for banks, bad news for middle age investors?

As a sometime professional expat I know the trouble you can get yourself in when the good times are flowing. Well it's often good to break away from your immediate peers and try and meet some "real" people. With this in mind I can certainly recommend the following which I received from a good friend in HK today:

I can only marvel at peoples durability in being able to accomplish feats such as this. I know from my own reading that anyone attempting such a challenge needs to plan the setup of their bike very carefully. I'd suggest going to the lecture and checking out a book entitled "It's All About the Bike" by Robert Penn. Mr Penn goes about building his perfect bike in the book and importantly shares some secrets for those going long distance touring including the fact that steel frames are better than carbon or aluminium because if you're in northern India it's likely you can find a welding shop, but unlikely that you'll find a specialist in carbon lay-up technology.