Make mine a Big Mac meal . . . why I should have treated myself to McDonalds yesterday

I didn't have to look at the S&P500, Dow or Nasdaq on Friday to know the market was going to take a hit. If you're like me you get these dinky short messages from Bloomberg via your smart phone with a couple of lines of news. When I woke up on Saturday morning mine said McDonalds earnings $1.43 a share v. analyst estimate $1.47. You see McDonalds has been a clear outperformer for a number of years now and a lot of that has been because of their growth in Europe. I used to always joke with my French friends about how McDonalds was growing fastest in France. GE produced similar disappointing results and Google remained week after surprising the day before.

Don't get me wrong, it wasn't a terrible day, but it was a reminder of how high stocks have gone since 2008. The theory that cheap money alone can justify a portfolio is flawed in my view.

For those traders really in to fundamentals it is the debt markets rather than the stock market that offers real possibilities of good returns. The FT today had piece regarding the trade in MF Global creditor claims. In my career I've been involved in a number of these situations. In Korea I saw some truly awful bankruptcies because of the convoluted structures often associated with "chaebols". Often during 97 - 99 you wondered if the cash had ever been in the correct company's accounts in the first place. At other times governments and companies in South East Asia understood better the need to reach some form of financial conclusion, whether that be full, part or debt for equity swap and in some cases a combination of the two. MF Global looks likely to pack back 90 cents in the dollar to creditors, which in some ways makes you wonder why the company nearly went under in the first place. Having said that I don't know where the low was on the major tranches of debt, but I can guess if it was anything like Lehman's then it was likely to be far below 50cents in the dollar . . .  Some major tranches of Lehman's International traded into single figures and eventually paid out above 50.

In Australia there were leaks over the weekend about a large hole in the budget because of the fall in commodity prices. The local finance chief Wayne Swan released an update to the May 2012-13 budget today Swan saying that global conditions had cut almost $22 billion from tax receipts over the forward estimates and $4 billion alone in 2012-13. Therefore in order to meet various promises he was looking to find 16.4bn in new savings over four years to return the budget to surplus. I don't think the average man on the street believes him. For a start he said trend growth would be 3% in 2012-13 and 2013-14. He better hope the Chinese don't pull the plug on stimulus or he's toast on that one because he's also forecasting Australia’s terms of trade it worsen, declining by 8% this financial year compared to a previous forecast fall of 5.75%. The politics here is that an election is coming in the first quarter of next year and these revisions are meant to hide the reality from the electorate.

My Garmin 800 told me that I'd expended roughly 2300 calories during the Spring Cycle Classic here in Sydney yesterday. Look it was probably closer to 1700, but the good news is that it's enough to have considered a Big Mac meal somewhere during my ride back from the Olympic Stadium. I wonder if they would have let me use the drive through on my bike?

Someone was smart enough to section out the actual 50k ride on Strava so you didn't have to make estimates of time. I was really happy with my time given the stop start nature of the event. 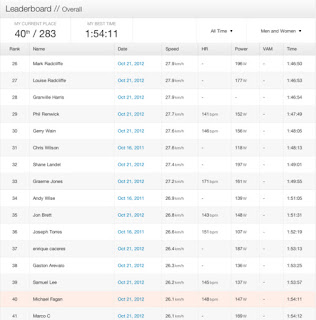 40th of 283 Strava riders seems pretty respectable to me. More importantly the Cannondale got through it all with out any noticeable movement in the handlebars. 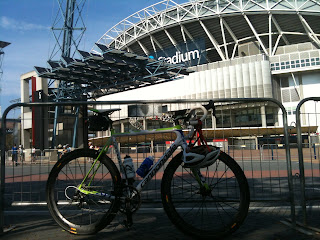 The event course itself was a bit tight as the idea was not to race, but rather to get to know the commuter cycling trail that the city and associated districts have put in place. I can tell you there are some pretty tight twists and turns that really call for an old fashioned commuter bike rather than a racing bike on carbon wheels. Obviously I road home on the standard roads.

I am now considering doing the 90km ride to Wollongong next month. I'd really prefer not to do it on my own, so if anyone out there feels up to it I can offer a lift back and a place on my bike racks for your trusted stead.