Substance and style . . . not always a pair

A week ago a friend of mine sent me a video of Wall St Journal doyenne Dorothy Rabinowitz railing against the new Citi-bike scheme in NYC. Well I had to chuckle when I saw the reply by Jon Stewart.

I feel sorry for people unable to embrace the change occurring in the worlds major cities. The thinking that everyone in a city of 5m or more can drive 20minutes into the centre of town and park their cars for little cost is wrong. Governments will come around at various velocities, but they will come around. New York is a great case for restricting the car as are the great cities of Europe with their constricted medieval hearts. People in my current home town have eschewed public transport and local bicycle travel because the responsible governments have failed dismally to invest in the appropriate infrastructure. The frustration of drivers is palpable most days because they have organised their lives around the car, rather than arranging a car to fit in with their lives.

As part of my own coping mechanism with the city I've up-sized the lights on my bike. It spooked me that a woman was killed here over the weekend on a street that I occasionally use for training on a clear sunny non-work day. Therefore I biked down yesterday to one of my local bike shops, Cheeky Monkey near the cycling hub of Centennial Park and checked out what the latest in lights was. I selected the Moon X Power 500. 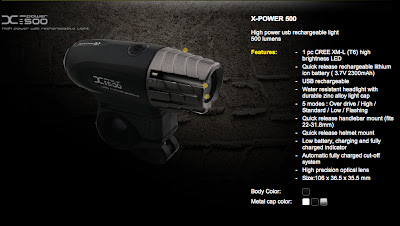 I've only had 70 lumen front lamps up until now because I usually don't cycle in absolute darkness. My first impressions are that 500 lumens is a truck load of light (pardon the pun). The flashing function is unbelievable, so much so that I'm very concerned about blinding on coming drivers. I can't even contemplate what sort of light you get from the 1500 lumen version. The only problem I have is with the mounting bracket as it's quite bulky on the Cannondale and will not work at all with the type of handlebars I have on the Pinarello. The problem is that the bar routed brake and shifter cables get in the way from mounting the base easily. I'll play around with it and see if I can get a better solution. For dedicated commuters the light comes with a helmet mount which might be a better solution in pure night riding. My conclusion so far is that the substance is good, but the design or style are somewhat lacking.

Bond markets now in retreat and there will be more than one or two large investors licking their wounds after confidently investing in the largest of the mega bond deals, Apple's $17bn 6-part offering of April 30 because of what they thought was substance and style. The main tranche is down 9% since issuance, but I'm sure if you asked a bond fund they'd say something like: " . . . yes we bought it, but only so we could swap out some of the junk grade stuff we killed it on since early 2012". Well that may be the case, because as we all know investing is a game of relative value. Apple stock is up since April 30, though it had been trading some 4 - 5% higher during the marketing period of the bond, meaning the idea of switching stock into bonds as a protection against a slowdown at Apple has failed on a dollar for dollar basis. It's a salutary lesson that a stock can be expensive, but so too can a bond and is worth tracking as a total return pair of the rest of the year.

Perhaps the ETF world got the bond market about right as Pimco's Total Return Exchange-Traded Fund (ticker symbol: BOND) suffered its' first outflows since listing during the month of May. If Apple trading has lessons, so too does the trading of instruments such as this ETF. I'm sure the algorithmic and CTA momentum players are among those who exited the fund, but as returns for May performance are coming through it's noticeable that the increased volatility has not been kind to this style of investing. This is why turning inflexion points are so difficult to trade.

Bond investors don't want to believe what they're seeing because they've in general made good returns fro the strategy. Most want to believe that the Fed is going to exit more slowly than currently being implied by the market. For example the FT quotes Michael Pond, interest rate strategist at Barclays as saying:

“The bond market seems to be missing the point that the Fed’s policy of tapering depends on the tone of economic data. The market has moved from pricing in less bond buying to a full-on tightening cycle and we believe that is a different story than what the Fed is trying to communicate.”

In a way he's right. The Fed certainly wants to believe that the message they've sent is consistent with the trend and not the raw numbers. The problem is that waiting for the Fed to action the trend will probably be too late for all but the most precise and savvy of investors.