The most important data this week will come from the release of the Case Schiller Housing Index. Economists are forecasting a bit over 2% for April which would mean over 11% yoy.

The momentum in the US economy is clear and obviously this is the reason why Ben Bernanke has signalled that it's time to move on from QE. Thats why bond markets have been so volatile in the last week. The most scary thing though was the huge gap late last week in Shanghai interbank offered rate (SHIBOR).

The conspiracy theories abound, but there is no way that the Chinese leadership wants a disorderly market and therefore I'm left with a feeling that much of what we're seeing in China and the rest of the world is large financial institutions defending their credit lines by cutting back exposures to the least credit worthy ahead of the Fed exiting from a policy of direct market support. Think about it this way; up until now you could swap out various obligations through the central banks, but in the next year that will become more difficult. The Lehman's collapse and the subsequent global banking crisis taught financiers one clear lesson . . . don't be the last one out of the boat.

I've mentioned before that high yield debt was likely to be the first casualty of the Fed stepping back from the market. The Bloomberg Global High Yield Corporate Bond Index (BHYC) is now down nearly 4% for the month, but is still up 10% for the last 12 months. The index is yielding around 7%, which sounds good at the moment, but probably won't be so good in 12 months compared to government bonds. Additionally amongst these high yield names will be companies that won't make it . . . In other words it sounds great to gear up at the moment, but if your business doesn't work you have no chance of paying off that extra leverage. 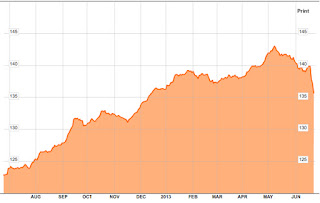 In Asia there's been a boom in this type of debt. During 2013 so far $22bn has been raised – well in excess of last year’s total of $16bn, but not a single high yield bond deal has printed in more than a month. If I were sitting on a high yield debt desk I'd be worried and as an investor I'd be getting out while I still can.

The one part of the bond market likely to see more action now is the CB's.  Convertible bonds have a distinct advantage in turning markets:

1. You give up yield but get upside from the equity participation in a stronger economy
2. Issuers will not get as good terms as straight bond issuers in terms of yield to maturity, but will get a better option premium due to rising volatility (i.e. the embedded option will be more expensive)
3. Bond funds can hold CB's and will happily ditch their "junk" to get something that at least has some chances of paying off in a rising rating environment 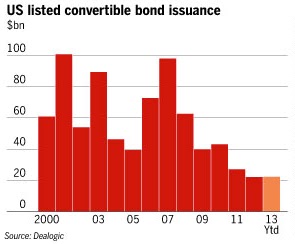 It's been raining in Sydney for the best part of 4 days now. I managed to get out on the Cannondale to test things after a short ride on Friday left my bike covered in road slime. Interestingly I had lost the easiest gears during Friday's ride because of road debris getting stuck in the cassette. Usually my bike wash is pretty straight forward and takes me about 90 minutes including lube due to my bikes never being that dirty. Even in Geneva I only had one serious storm to navigate that caused me to take more than 2 hours cleaning the Pinarello. When I wash my bikes I use the "soft" shower nozzle on the garden hose. The pro's can get away with the power washes, but they have the advantage of being able to remove and re-grease the bottom bracket in case of water getting into bearings. I think due to the amount of dirt I picked up I spent too long using the hose and managed to get some water into the down tube and that caused a horrible squeaking from the bottom bracket probably due to the grease being disturbed. Normally it would have been a trip straight to the local bike shop, but I decided to take out the seat post and allow the bike to dry out upside down. It worked because there was no noise yesterday and I learnt to be very careful in future while washing my bikes.

I've decided given the weather lately that winter is here and have therefore removed the Campagnolo Bora carbon wheels from the Pinarello and replaced them with the Mavic Cosmic Carbones. I know a lot of cycling stylists will call this sacrilegious, but here's some photos: 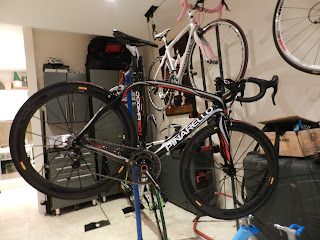